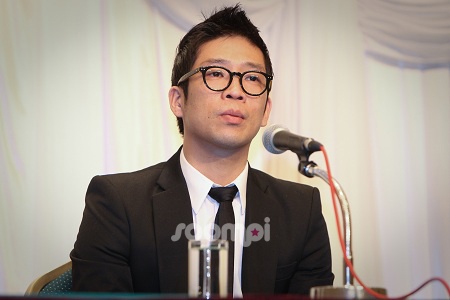 Rapper/entertainer MC Mong opened up for the first time about the alleged military dodging allegations, which he was found not guilty of last week, through a press conference held in Seoul today. He started off by saying, “I would like to apologize to all the people in Korea for causing so much trouble. For the past 10 months, during the whole trial, I was emotionally hurt. All I can say is that I’m truly sorry to the people of Korea.”

MC Mong was charged with intentionally extracting teeth in order to avoid the mandatory two-year military service in Korea. Although all Korean men are required to serve the military, certain people with poor health conditions, e.g. those without a minimum number of teeth, are subject to an exemption.

“It’s been real hectic with so many schedules. I do admit that I had some fear of enlisting in the military, but it’s not true that I intentionally extracted teeth in order to avoid military service. I feel victimized,” MC Mong said in front of more than 200 reporters.

He continued, “It is not true that I damaged my teeth just so I could delay my enlistment. I really wanted to clarify on that.” Many fans suspected him after it was discovered that he posted several questions on Korean web portals asking if you lose a certain number of teeth, you could get exempted from the military. “The questions I asked on the portal were just one of the many draft-related questions you see on any given day. It was just a question out of curiosity; nothing was intentional. I had no idea it would become such a big problem,” he explained.

He also addressed accusations of him getting implants immediately after receiving the army exemption. “It’s become part of my life to feel pain on my teeth. I had a lot of fear, and at first due to financial difficulties, and later because of my busy schedule, it was hard to get anything done,” he said. “I was really embarrassed about the pain. Also, my doctor told me it could cause aesthetic problems as well as additional health issues, so I just decided to put in nine needles (instead of implants).”

He said the only thing he felt he could do to the people that truly looked after him was to open up and respond to the investigations. “But I feel guilty for the wounds I inflicted upon Koreans. I’m not doing this to earn public support or any popularity; I just want to keep my dignity and feel confident about myself with regards to my duties of serving the country,” the frustrated rapper said.

Then he started to shed tears as he said, “To me, music wasn’t just a way out of poverty; it was life itself. But I feel terribly sorry to the people around me for disappointing them.” But he added, as hurting as it was, the whole controversy made him more mature and now he wants to take this as a chance to become more humble as a person.

MC Mong later expressed his willingness to join the army now, but since he’s not guilty of intentionally dodging the military, and his health conditions don’t meet the minimum requirements, he is unable to serve the country. “I don’t want to make any excuses but a lot of celebrities have to follow the order of their management agencies. In that process, I made rash decisions and I have nothing to say about it,” MC Mond said. “I’m not saying I’m standing here with honor. I still feel terribly ashamed. But as you all know, I can’t go to the army right now. The only way to go is to be guilty of the charges, but I can’t say I did something I didn’t do. I’m not sure how to move on at this point.”

He wrapped up the press conference by saying, “I think about it every day; how can I go to the army? I’m seeking ways the Korean people will understand and accept me. That’s all I want. I’d like to apologize to all the people in Korea and my fellow entertainers.”

MC Mong has been sentenced to a six month suspended jail term, one year probation, and 120 hours of community service for intentionally delaying his military enlistment, but was not found guilty of intentionally extracting teeth or violating military service laws.