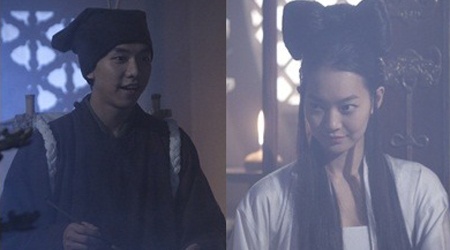 A Chinese Ghost Story (1987) is probably one of the highlights of Hong Kong cinema in the 1980s. With the upcoming Korean theatrical release of the 2010 remake, a fun poll asking which Korean actors would be perfect for the roles of Ning Caichen and Nie Xiaoqian, the two leads in A Chinese Ghost Story, was conducted.

Lee Seung Gi and Shin Min Ah took first by a landslide with 67% of the votes. The two actors received much love for their characters in last year’s trendy drama My Girlfriend is a Nine-Tailed Fox and have shown their ability to act in a fantasy genre. Mate’s couple Chun Jung Myung and Han Ji Hye and Thorn Bird’s couple Joo Sang Wook and Han Hye JIn tied for second with 13%. Jo Hyun Jae and Lee Yeo Won of 49 Days ranked fourth with 8% of the votes.

A Chinese Ghost Story tells a love story between an average man and a ghost. Director Wilson Yip aims to put his own touch to the famous Chinese story and make a brand new story. Actors Liu Yifei, Louis Koo, and Yu Shaoqun participated in the 2010 remake. A Chinese Ghost Story premieres May 12th in Korea.