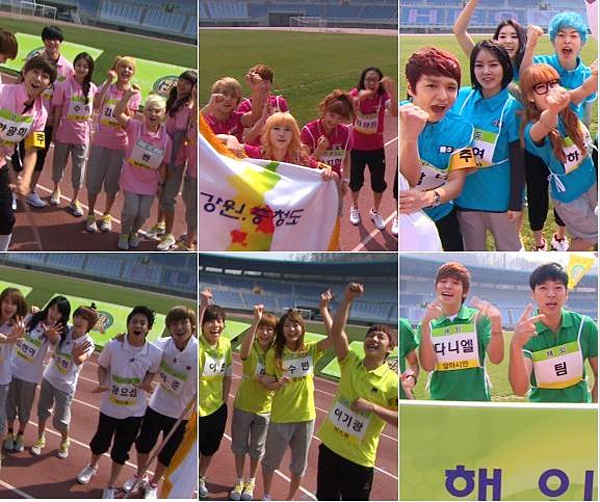 Idol group members have gathered together once again for sports! The title is “100 out of 100 points – National Idol Sports Battle” on KBS2 and this is different from MBC’s “Idol Swimming-Track & Field Athlete Competition” because the teams are divided by the areas that the idols are from.

The lineup is huge with idols from B2ST, MBLAQ, 4 Minute, Tiara, Sistar, Miss A, ZE:A, Teen Top, Dalmatian, Dal Shabet, Bebe Mignon, Brave Girls, Block B. There is also Kim Sang Hyuk, Jewelry, Lee Hyun, Tim, Kim Yong Joon, and Sam-D. In total there are 48 individuals and on the 20th they gathered in the Bucheon Sports Complex.

The different sport events range from basic fitness to track and field. Many of the events held on the 20th were simple sports such as doing sit-ups, chin-ups, and push-up to 50 meter sprints, inline roller skating, and running.

ZE:A and Sistar received the nicknames “Phys Ed Idols” because they had won the 50 meter sprints for both men and women on MBC’s “Idol Swimming-Track & field Athlete Competition.” It has been said that these two groups were especially fierce in their competition. The prizes were regional product sets and the idol stars were especially more competitive to win these prizes.

There were memorable scenes that showed the strong friendship between idols and although the show concept is one that has been used before, sports events on television always have their own entertainment value. It is always intriguing to watch idol stars step away from their sexy concept and wear tracksuits to compete.