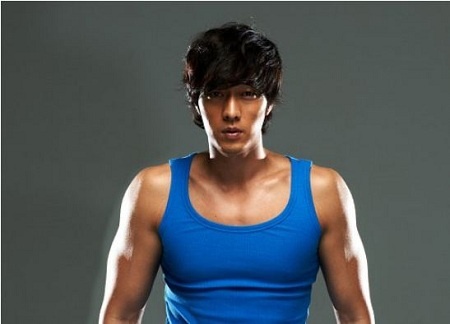 Actor So Ji Sub is the new face of Powerade. On April 27th, Coca Cola announced So Ji Sub as their model for the upgraded sports drink. It’s not surprising that he fits the image – he’s known to love sports. He enjoys swimming, waterpolo, tennis, golf, boxing, and many other sports as well. So used to be a competitive swimmer and even won medals at the national level before his debut as a model.

He is currently shooting the movie “Only You,” where he plays a boxer who sacrifices everything for the woman he loves. Actress Han Hyo Joo stars as his love interest. So Ji Sub established himself as a versatile actor by challenging himself with new roles and showing his fans something new.

Coca Cola stated, “So Ji Sub’s healthy image and our drink were a perfect match. We believe the two will have a synergy effect.”

So Ji Sub flew to Thailand early April to shoot the commercial. He displayed his passion and thirst to challenge himself during filming. There were many action sequences in the scenes, but So refused to use a stunt double and completed the action himself. The people on set commented, “there’s no one like him,” “he’s an amazing model,” and “no one but So Ji Sub can pull that off.” His fans from Thailand flocked to the airport to catch a glimpse of the hallyu star when they heard of his arrival and watched as he filmed the commercial. At one point, the crew had to stop filming because a huge mob of people gathered on set.

The actor is establishing himself as a blue-chip model in the advertising world with various endorsements in electronics and household products. The new ads for Powerade will take advantage of So Ji Sub’s masculine and athletic image by showing a rough and wild side to So. The commercials will air sometime in May.

Model
So Ji Sub
miscellaneous
How does this article make you feel?