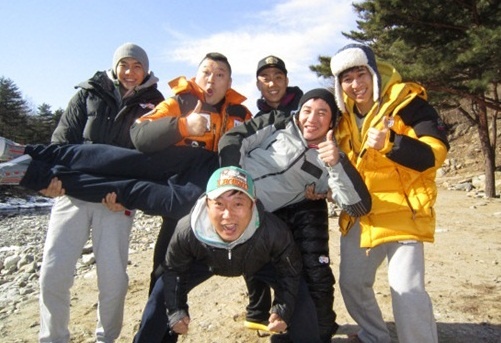 Last month, ‘1 Night 2 Days’ writers have been preparing for this segment and asked Korea’s top actresses: Choi Ji Woo, Kim Soo Mi, Yeom Jeong-Ah, Kim Ha-Neul, Lee Hye-Young, and Seo Woo to appear on the show. These episodes are going to be filmed on the 6th and 7th of May. The episodes are going to be aired on the 21st. The location of the shooting is unrevealed as producers are doing their best to keep everything a secret until the airing.

The show, ‘1 Night 2 Days’ is known for not having females on their show , with the exception of Shin-Ji, a singer the group ‘Koyote’. This is the first time when there is going to be an equal ration of male to female appearing on the show.

It is well-known in the entertainment industry that actresses Choi Ji Woo, Kim Ha-Neul, and Yeom Jeong-Ah rarely participate in appearances on shows. However, their agencies have stated, “Because of the writers and producers’ persistent requests to appear on the show, we came to an agreement to appear”.

Actress, Choi Ji Woo is famously known in Japan for her role as Jeong Yoo-Jin in the drama, ‘Winter Sonata’.

Actress, Yeom Jeong-Ah is known as the best supporting actress as a stepmother in the horror film, ‘A Tale of Two Sisters’.

Actress, Kim Soo Mi is known for her many roles in various movies and dramas: ‘Unstoppable Marriage’; ‘Marrying the Mafia II & III’; ‘Hello Franceska’; and ‘What Happened in Bali’.

Actress, Lee Hye-Young is known for her role, Yang Bong Soon in the drama called, ‘Queen of Housewives’.

The youngest out of the six actresses, Seo Woo worked side by side with actors: Moon Geun Young, Chun Jung Myung, and Taecyeon in the drama, ‘Cinderella’s Sister’ as Gu Hyo-Seon.