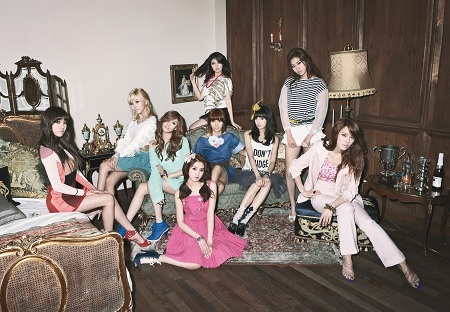 Fans Should Expect More Additions to After School

After School is like a school. It accepts new recruits as some of its other members decide to graduate. Other groups probably wouldn’t be able to survive such unstable situations, but After School has managed to find a balanced system of accepting and graduating its members. UEE, Lizzy, Raina, and Nana are just a few who were continuously added since the group debuted in 2009 with “Ah.”

After School announced E-Young (20) as the newest member of their crew in time for their “Virgin” comeback. Multi-talented E-Young is musically gifted and plays various instruments like the piano, electric guitar, bass, drum, flute, and cello. While they’ve had a successful comeback, E-Young is still probably adjusting to her life as part of After School.

E-Young expressed, “It’s fun and exhilarating to be able to practice and perform with members I’ve seen on TV. They’ve gotten this far with their extensive efforts, and I’m lucky to be part of the group.” She added, “Truthfully, I haven’t gotten much of a chance to really talk to them, and I would love to get closer to the other members.”

Team leader Kahi mentioned, “E-Young hasn’t shown us much of herself yet; but then again, it hasn’t been that long since she joined us. One thing for sure is that she’s very curious and asks a lot of questions.” She’s the same age as Lizzy, but the two are completely different. Their members commented, “Lizzy is like a grown up, but E-Young is a baby.”

UEE was introduced as the newest member with the release of After School’s digital single “Diva” in early 2009. Raina and Nana were added in time for their second single “Because of You” in late 2009, and Lizzy joined in early 2010 with their third single “Bang!” E-Young is the fifth addition making After School a nine member girl group. In reality, only one member has graduated to date. Yoo So Young left the group late 2009 citing health issues. As a result, the ever growing size of After School has gotten fans wondering…How far are they going to go?

The members also confessed their concerns for the growing population. They joked about having to rent a bus to move the entire group from location to location. UEE stated, “We could grow to twelve members.” Kahi followed the comment by saying, “To tell you the truth, I’m ready to graduate,” to which the rest of the members said, “We won’t let you go!”

One of the difficulties with such a large group is that it’s hard to schedule a meeting or practice where everyone is present. Whenever someone misses a practice or show, the remaining members have to rearrange their choreographies to have multiple versions.

Two new girls were featured in songs for After Schools latest album “Virgin.” Yoon Jo featured in “Dream,” and Kyung Min featured in “Funky Man.” Both are trainees under Pledis Entertainment, After School’s management agency; and they are expected to debut as part of After School in the near future.

Enough is enough. How many members can After School take? Why doesn’t Pledis just make a new girl group under its label instead of having every one of their trainees go through After School?

After School
E-Young
Pledis Entertainment
How does this article make you feel?