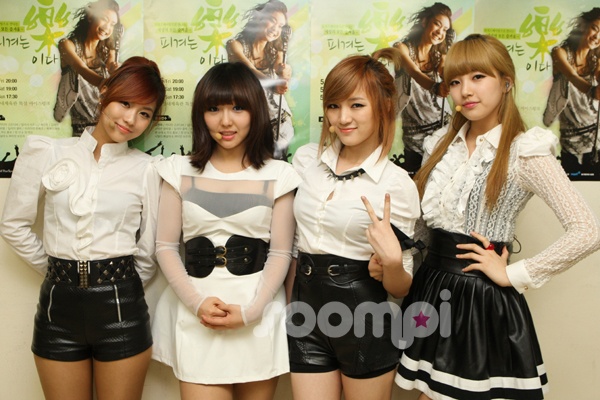 Miss A, best known for their hit singles “Bad Girl, Good Girl,” and “Breathe,” is coming back with a new album. Their debut last year was a big success and fans have been anticipating the group’s return scheduled for later this month. Over the past weekend, Miss A, comprised of Fei, Jia, Min, and Suzy, has made a special appearance at skating queen Kim Yuna’s “KCC Switzen All That Skate Spring 2011.” Soompi had the privilege of interviewing the pop divas at the skating event that also featured Miss A’s first live performance of “Love Alone,” their main English track from the upcoming new album.

Miss A “Love Alone” First Performance vs. The Day After

“We saw a lot of people yesterday but it looks like there are more people today. I was so nervous to release our new track in front of Kim Yuna and other global figure skating stars—but just being there was a great honor for us,” Min said. She was already quite nervous that day but it got worse when the sound system broke down during the performance. “Because of the pressure, we practiced so much…but I think the quality was as good as we practiced. I think today being the second day (of the event), I’m less nervous. I’ll practice harder and put on a better performance when our title track gets released.”

Their debut track “Bad Girl, Good Girl” and second single “Breathe” allowed Miss A to showcase their powerful performing skills, which left a strong mark in the K-Pop industry already flooded with similar girl groups. Those who support Miss A are perhaps anticipating an even stronger performance from the quartet. But to Miss A, this groovy number “Love Alone” might feel a bit awkward and out of the norm.

“Performance-wise, it might feel a bit softer, but the song’s overall feel and groove are more intense so I’m sure the fans will like it. Plus, the lyrics are in English so foreign fans will feel more comfortable listening to it,” Min said. If their previous tracks had the fresh energy of a rookie band, “Love Alone” has a more rhythmic and lively beat, reminding of a more mature and sexier group. They all say “It gives a lot of pressure…” but their confidence is evident in their smiles.

Today’s music industry is called the digital era (for the increase in music downloads) and thus the value of a full album has somewhat dropped—but to singers, a regular album still carries significant meanings.

“You can include a lot of good tracks, and a variety of songs in a regular album,” Fei said. She’s been extremely busy putting on the final touches to their new album and coming up with new choreography, but nonetheless you can sense her excitement for the group’s first regular album. “I guess in my rookie year, I felt less nervous or any pressure; I just thought I had to train really hard. But after our debut track gained so much popularity, I started feeling a lot of pressure—but with pressure came more passion,” she added.

The youngest member Suzy instantly became a star actress through KBS drama “Dream High,” while Fei, Min, and Jia have appeared in countless variety shows. Suzy in particular is excited to return from her brief acting stint, as she missed the live stage where singers can freely interact with the crowd. “Nothing has really changed, but I’m just really happy to practice with other members after such a long time away. I can’t wait to meet the fans as a singer this time, and I just love going on stage. I want to show our best performances as Miss A,” Suzy told us. “I’m probably very biased because it’s our own song—but I’m just really pumped up about it,” Min said as the whole group seemed quite inspired about their new album promotions. “If you do a lot of variety shows, you sometimes forget your job as a singer. But I got really excited after practicing together again. I can’t wait to go on stage,” Min added.

English vs. Miss A

Their new track “Love Alone” is in English. Except for Min who’s fluent in English, it’s quite a challenge to other group members. Fei, in particular, is in charge of the majority of singing and it was extra hard for her to complete the recording in English. “I’m not that good at English. Plus I was given the toughest part with the most lyrics, so it was even more difficult. Except for Min, who speaks fluent English, it was quite a struggle,” Fei said. In order to practice their English, the group members watched American TV dramas. “We’re all so into ‘Vampire Diaries.’ We started watching it to learn English and it helped a lot in honing our English accent and pronunciation,” Jia said. “I left the girls watching a drama to go brush my teeth one day, and all of a sudden, I would hear ‘Hello, hello, how are you? How are you?’ from the living room,” Fei added as Min playfully teased them, “But their accent were so bad!”

Fei just recently turned 24 years old. To celebrate her birthday and the group’s 300 day anniversary, Fei and the group members invited 10 other staff members for a little party. People who were there attest to Fei’s gourmet cooking skills as she cooked a number of different Chinese dishes. “The way she was handling the frying pan was almost professional,” a staff who saw Fei cook said. “I heard Jia’s also learning from Fei these days,” the staff member added. Who knows, we might soon be able to see Jia holding a fry pan skillfully cook for us next time!

Miss A said they’re just amazed at their foreign fan base. “I want to show my dances, songs, and just everything that I learned from Korea when we perform abroad next time,” Fei said, adding, “All of our activities, drama, variety shows, and album promotions, were done only in Korea—yet it’s amazing how our overseas fans know and care for the smallest details of our group. Thank you so much!”

Miss A would like to ask its global fans:

1) What do you find most attractive in Miss A? What are your favorite moves of the group?

2) In Korea, “Bad Girl, Good Girl” was the most popular. How does it appeal to fans in China and other foreign markets?