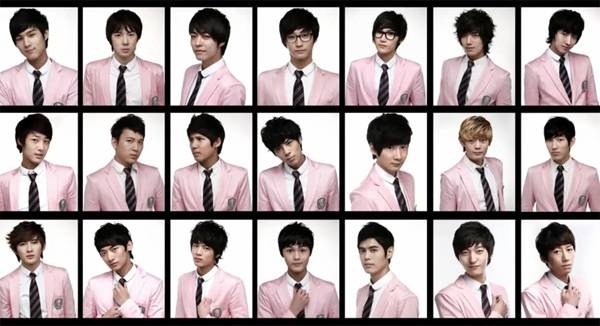 The crown of “biggest boy group” has been snatched from Super Junior and passed on to the fancy 21-member idol group A-Peace. These flower boys have finally unveiled themselves to the world, well more specifically Japan. “Lover Boy” is a fast blend of electronic, synthesized melodies straight out of Shibuya.

The group will be promoted as 3 sub-units, each containing seven members, similar to how AKB48 operates in Japan. Also similar to how AKB48 began, performing in the Akihabara district (hence the AKB in their name) daily, A-Peace will be performing daily in Tokyo’s K Theater which seats 220 and is Japan’s first private K-pop theater. Their goal, they have stated, is to give their best performance each day. They have already gained some publicity, being featured prominently on Fuji TV.

They were previously called Double B 21, and whlie we may not know all their names yet, one interesting tidbit about this group is that they are all 185 cm in height!

Following a series of promotions in Japan the boys will return to Seoul and begin activities in Korea.