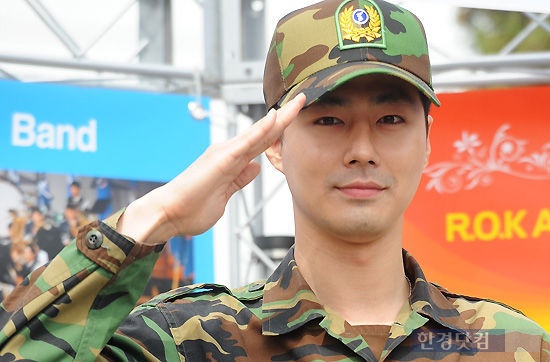 Jo In Sung, who just recently completed his military service, made a guest appearance on today’s SBS “Bae Gi Wan, Choi Young Ah & Jo Hyung Ki’s Good Morning” show to talk about his past kiss scenes with female celebrities. He is well known for carrying out surprise kisses in a lot of those scenes as were the case in SBS drama “Spring Days” with Go Hyun Jung, the movie “Mean Streets” with Lee Bo Young, and SBS drama “What Happened in Bali” with Ha Ji Won. In particular, regarding the kiss scene with Ha Ji Won, the star actor said, “I could have made a lot of NG (no good) scenes…I almost broke my teeth when it hit her’s (Ha Ji Won),” causing everyone at the set to burst out laughing. This comment however is exactly what Ha Ji Won said at a fan meeting in 2007 when asked to pick her favorite partner. She said at the time that “The kiss scene with Jo In Sung was the most memorable. I thought my teeth were going to break.” Jo In Sung finished his mandatory military service on May 4th and is set to return to the Korean movie/drama scene shortly.

Ha Ji Won
Jo In Sung
How does this article make you feel?