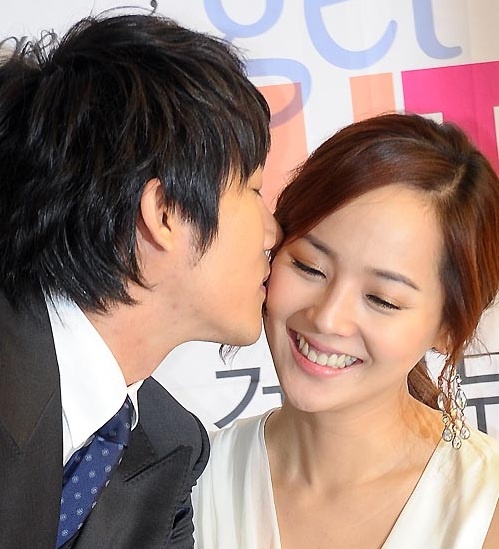 After announcing their plans to get married about two weeks ago, S.E.S. Eugene and actor Ki Tae Young appeared together for the first time at a press conference today and shared their thoughts about the wedding.

At a press event originally held for the release of Eugene’s new book, “Get It Beauty,” Eugene said, “People misunderstand and think we started dating since the beginning of (MBC drama) ‘Creating Destiny,’ but that’s so not true. We weren’t that close back then and we only started to go out towards the end of the show.” Eugene and Ki Tae Young appeared as a married couple in MBC drama “Creating Destiny,” and rumor had it the two dated for about a year and a half since the beginning of the show in January, 2010.

Ki Tae Young added, “As we got to the end of the drama, I realized that Eugene had an untainted view towards the world, and so we started to talk a lot with each other. Naturally we got really close and started to date soon after.” In fact, it was revealed that Ki Tae Young had no idea who S.E.S was back then, as Eugene said, “He said he would sing me an S.E.S song but wrongly picked Baby V.O.X’s song.”

The couple said they like to call each other “Brother-Nim (Mr. Brother)” and “Sister-Nim (Ms. Sister). “Early in our relationship, I used to call her ‘ugly girl’—just so I could hide her beauty from others,” Ki Tae Young said. Eugene said she liked Ki Tae Young’s “family-oriented” personality the most while she picked his “conservative” ideas as the worst. Ki Tae Young, on the other hand, said, “Eugene has no bad sides. She’s just a bit too cool. Also, there are too many good things to say about her.”

When asked how the two were able to hide their relationship for over a year, Ki Tae Young answered, “To be honest, we never dated secretly. We just wore hats together, but freely went to restaurants and church every weekend.” In fact, Eugene said the place where the press conference took place was a spot the couple used to frequent in the past. “We used to come here a lot. It stays open till late and there are not a lot of people during the day so we came quite often,” Eugene said.

The two were also asked about their plans for children. “We both really want to have children. We’re thinking about three to four children and want to have our first baby by early next year. But we kind of want to enjoy our newlywed life at first and do some work too before having a baby next year,” the soon to be groom told the press.

Eugene and Ki Tae Young announced through their respective fan sites two weeks ago their plans to get married. They will tie the knot on July 23rd at a local church just outside of Seoul and will travel to Europe for their honeymoon.

Just for your entertainment, here we’re attaching a photo that’s been circulating the Korean web recently, titled “Imaginary Photo of Eugene and Ki Tae Young’s Children.” Created with a smartphone application, it gives hypothetical photos of what the couple’s future children would look like. It sure looks like the two make a perfect couple– what are you thoughts?