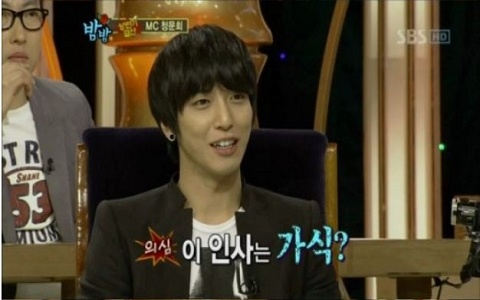 Former H.O.T. member Jang Woo Hyuk confronted CNBlue’s Jung Yong Hwa on yesterday night’s episode of SBS’s “Night After Night.” Jang Woo Hyuk stated, “Jung Yong Hwa seems pretentious. He was very courteous when he greeted me today on set, but there was an incident where he blew me off.”

Jang Woo Hyuk stated, “I asked several junior singers for support messages for the opening of my homepage. However, CNBlue’s Jung Yong Hwa rejected my request, and I want to know why.”

Others on set questioned, “How can you say no to none other than H.O.T.’s Jang Woo Hyuk?” H.O.T. was one of the most popular boy bands in the 90s, and it’s no exaggeration to say they began the idol craze in the Korean music industry.

Seeing his flustered face, Jang Woo Hyuk teased, “Groups that are more popular that CNBlue agreed, but why did you refuse?” Jung Yong Hwa explained, “I really had no idea [about the request]. If I had known, I would have done it.” It was all too obvious that others on set were having too much fun teasing the young leader. g.o.d. member Kim Tae Woo amusingly said, “He’ll start crying if we push him a bit more.”

During the episode, Kwanghee also stated, “Jung Yong Hwa said he wanted to become close friends, but he’s never given me a prompt response to my texts. Additionally, his texts are short one word responses. It was upsetting and it lowered my self-esteem.” Kim Tae Woo added, “He returned my text a day late, and it was a halfhearted response. “

Jung Yong Hwa clarified, “I don’t have a personal cell. I use a MP3 player, so I need to find Wi-Fi hotspots to send texts. I recently lost my MP3 and bought another, so I didn’t have anyone’s contact address.”

Jang Woo Hyuk made his solo comeback on the 25th and released his music video for “Time is [L]over” today. Below is the congratulatory message CNBlue “refused” to shoot. The video includes messages from Jang Woo Hyuk’s junior singers like DBSK, Mighty Mouth, Kim Tae Woo, Wheesung, etc.