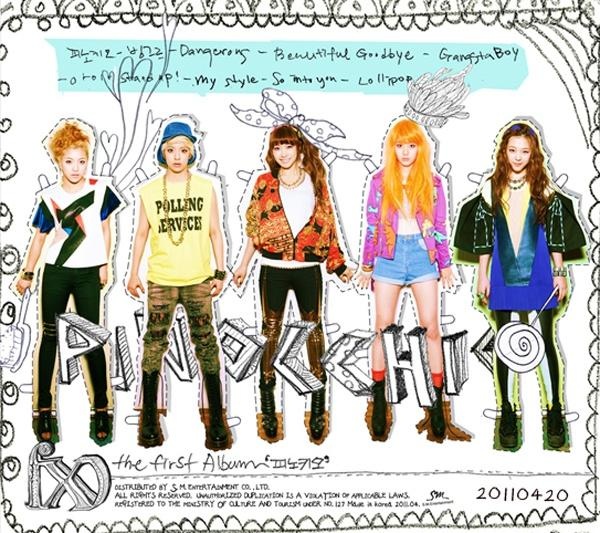 BIOGRAPHY
The Soompi artist of month for June is the female idol group f(x). The multinational act f(x) is composed of five girls with diverse nationalities – Amber is Chinese-American, Victoria is Chinese, and the remaining three girls are Korean. The combination of diverse talents, experiences, and appeal set this new group apart from others. Their debut song hooked a large number of fans from the get-go with its cheerful and addictive melody.

They debuted on September 1, 2009 with the digital single “LA chA TA”. Later that year in November, they released their single “Chu~♡” which really put them on the map. Their style was not purely just cutesy like their fellow SM Entertainment girl group Girls Generation. Incorporating femininity and charm, the girls displayed more of a funky, fun style with a hint of street. Their song “NU ABO” definitely clinched this appeal and continued their trend of getting better with each single.

The members of this group have also been active guests on popular variety programs. In fact, Sulli was a regular on a variety show featuring a main female idol stars and MCing on SBS Inkigayo, while Victoria gained a lot of love for show her true self in her pretend marriage with 2PM’s Nickhun on “We Got Married”.

The rapper, Amber, had to pull out of “NU ABO”‘s promotions early due to an injury. She took off for the States for a prolonged period of time which even triggered disbandment rumors. However, she came back in time to record, prepare, and release their new album “Pinocchio”.

f(x) is known for their esoteric and experimental music and lyrics. Their full album included a sweet retro pop number called “Love”, a retro and witty song titled “Gangster Boy”, an eclectic dance song titled “Sweet Witches”, and a soft ballad called “Beautiful Goodbye”. Pinocchio has a total of ten songs, and the title song which is the same as the album title, has swept all the music charts in Korea, becoming the group’s first ever No. 1 song.

Two songs, “Stand Up!” and “Lollipop”, seem to stand out from the rest. “Stand Up!” is a collaboration piece between f(x) and well-known indie band Peppertones and gives the message of hope. The mix with Peppertones’s bright sounds and f(x)’s energy is perfect for the song. Additionally, “Lollipop” is a song about young love and compares the sweet emotions people go through to a lollipop. “Lollipop” is also special because it features boy band SHINee.

Artist Of The Month
f(x)
How does this article make you feel?