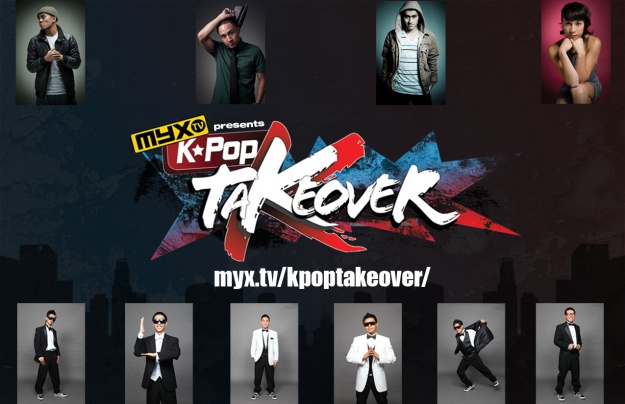 Who says you can’t dance, show them up and prepare to bust a move! We have seen the flash mobs on YouTube, the moves in music videos, and here is your chance to learn from the masters themselves. Some of the greatest dance choreographers and minds behind the K-Pop industry will be attending the K-Pop Takeover event to teach you the moves of your favorite artists.

MYX TV will be hosting K-Pop Takeover, the first ever K-Pop dance convention and the Soompiers will have a chance to score some free tickets. This event has been arranged for the fans: you have a choice as to what you want to learn. You have a chance to win signed souvenirs and get to learn moves that have not been released yet in upcoming music videos.

We have opened an official thread in the forums for the K-Pop Takeover event. All we want you to do is spread the word and express your enthusiasm. We will randomly select posts from the thread as winners and contact you through your account email in order to give out tickets to the event. Remember this event will be held in North Hollywood so make sure that you can attend. If you can’t make it let a friend know so that they may have a chance to go.

We will be announcing more give-a-ways and event teasers as the date approaches. Soompi and MYX TV want to see your enthusiasm and hope to bring more K-Pop events to you just like this!

Also stay tuned for the premier of the Soompi Top Ten hosted by MYX TV broadcasting in your area tonight and on their website www.myx.tv (check out the promo video for K-Pop Takeover as well). If you haven’t voted already for this week’s song be sure to get your vote in (can vote once every 24 hours).

Check out the press release of the K-Pop Takeover event below.

MYX TV BRINGS DOWN THE HOUSE WITH

Redwood City, Calif. (May 9, 2011) – MYX TV, the only true Asian American television network, proudly brings the first ever K-Pop dance convention to the United States on June 18 and 19. K-Pop TaKeover takes place at the Beverly Garland’s Holiday Inn in North Hollywood where K-Pop fans and dancers gather together to learn the latest and greatest in dance from Movement Lifestyle and America’s Best Dance Crew’s Poreotics.

“We wanted to bring together some of the dance industry’s most revolutionary artists and now, they’re finally here,” shares Miguel Santos, Head of MYX TV. “California is home to some of the hottest young dance crews and we want to contribute to the evolution of the dance scene through K-Pop TaKeover.”

The convention brings together famed dancers and choreographers that changed the landscape of hip-hop and the K-Pop movement. Movement Lifestyle choreographers Lyle Beniga, Shaun Evaristo, Keone Madrid and Mari Martin have worked with some of K-Pop’s biggest stars like Taeyang, Big Bang, GDragon, 2NE1 and Se7en. They have led the redefinition of the music and lifestyle that K-Pop is known for around the world.

“We’re really excited to bring our art to the whole community that loves dance and K-Pop music,” says Shaun Evaristo, choreographer represented by Movement Lifestyle. “K-Pop TaKeover is going to be a great experience for fans and dancers but will also be a really special one for us.”

Poreotics is no stranger to the US dance scene, as MTV’s America’s Best Dance Crew Season 5 winners. These shaded showmen inspired by robots, entertain the dance world with their unexpected humor and revolutionary mixed style. As they laboriously honed their craft of popping and robotic movement, they blend different dance styles, giving them a distinctive animated look that’s fiercely entertaining.

“We are so excited to be a part of the first-ever K-Pop Tour with MYX TV and Movement Lifestyle,” says Matt Nguyen aka “Dumbo” of Poreotics. “K-Pop and popping… Who could ask for more?! This is going to be the first of many to come around the USA and the world!”

Movement Lifestyle
Shaun Evaristo
How does this article make you feel?