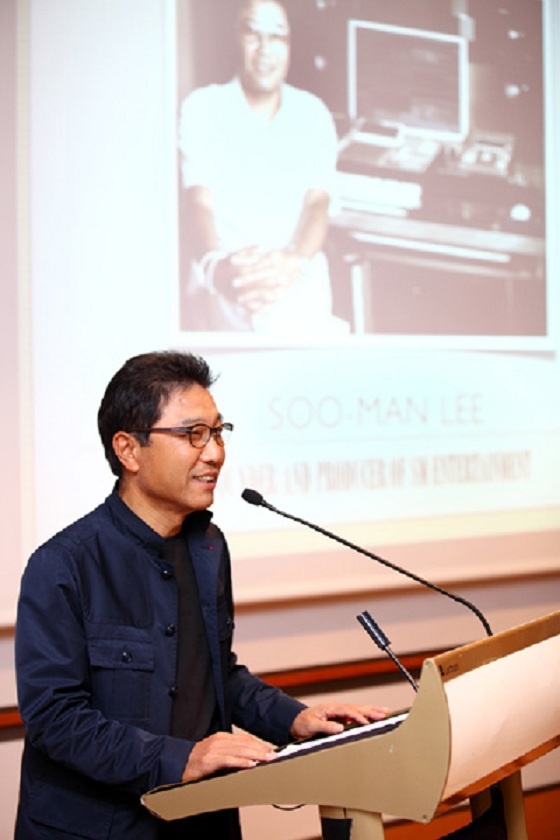 Lee Soo Man’s conference was held on June 11th around 1pm (France Time) at the Marriot Rive Gauch with over 50 other famous European producers and publishers. The conference introduced SM music and also Korean wave strategy.

Lee Soo Man explained about the SM producing that was based on CT (Culture Technology) theory and explained the different producing and specialties of the general system. After his lecture was over he received a standing ovation from the audience.

Teddy Riley was at the conference and he said, “Making music with SM I gained interest in KPOP, watching SMTOWN Live’s Paris concert I began to see K-POP as one large movement spearheaded by SM’s music.”

Willie Morrison also spoke saying, “Yesterday I watched the SMTOWN Live concert for the first time and it was very impressive,” “the crowd reminded me of the fans in England that used to go crazy over the Beatles.” He also continued by saying, “SM will be the most powerful company in 5~10 years. The reason SM was able to grow so much is because of its philosophy. They call it CT and because this is its basis, the music is different from Europe and probably grew this much.”

SNSD’s Tiffany also joined the conference and gave her thoughts on the change of global phases as an Asian Pop artist and also the training she went through.

This conference was planned with the goal of introducing the type of music SM pursues, and also to become a starting point for creating more exchanges and ties. It has been said that through the conference many shared good music and ideas.

At the conference Universal Music Publishing’s Swedish CEO and Design Music who produced SNSD’s “Tell me Your Wish” was at the event.

SM Entertainment
Teddy Riley
Tiffany
How does this article make you feel?