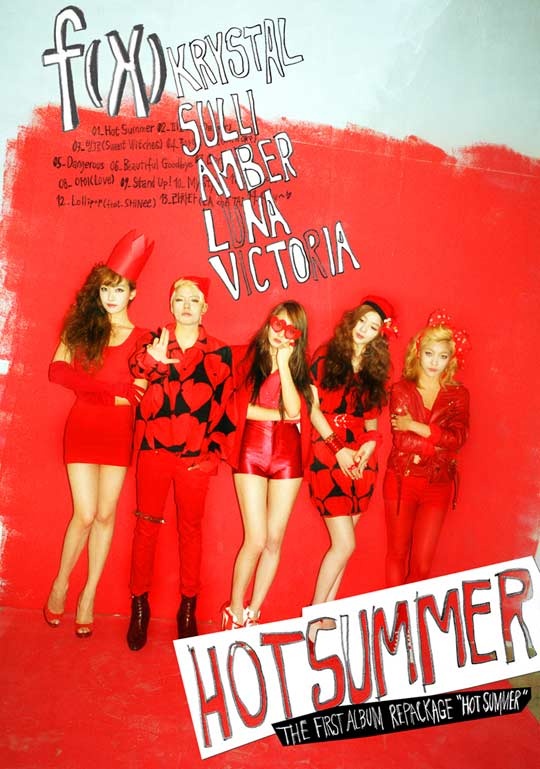 F(x) who has reached the top spot on various music shows with their first album title track, “Pinocchio,” has returned with a repackaged album titled, “Hot Summer” this month. There are a total of fourteen tracks in this album including the title track, “Hot Summer,” ten songs previously released from the first album, “Is It Ok” from the “Paradise Ranch” soundtrack, as well as hit singles “Lachata” and “Chu.”

Shin Hye Sung returns after two years and four months with his fourth full-length album, “The Road Not Taken,” exciting news for both the singer and his fans. The title track is “Tick Tock” a ballad number composed and penned by one of Korea’s top composers, An Young Min. Shinhwa fans will recognize An for creating “Brand New” and Angel.” This song is expected to showcase Shin Hye Sung’s emotional vocals. Also included in the album is “A Little Bit Closer,” featuring Brown Eyed Soul’s Young Jun and “Hello and Goodbye” featuring Nam Gyuri and Shinhwa’s Eric.

Korea’s top vocalist, Kim Bum Soo finally releases part two of his seventh album, “SOLISTA” eight months after the first release. Currently, the singer has been quite busy taking part in MBC’s “I Am a Singer” reality show where he has shown fans his versatility by singing R&B, soul, ballad, and even rock music. Thus fans are expecting bigger things from this already great artist. The title track this time around is “End Love” a Yoon Il Sang and Yoon Sa Ra production. This song is about one’s last love who cannot forget one’s first love. There are a total of seven tracks in this album.

The soundtrack for the hit drama series, “The Greatest Love” will finally be released this month. Top artists from the likes of K.Will, G.Na, Heo Gak, and IU took part in this incredible soundtrack. Also included in the album is the title track, “I Can’t Drink” sung by Baek Ji Young. This ballad was co-composed by rookie composer Won Tae Yeon and Jeon Hae Sung and is about loving someone so much to the point of not being able to drink.