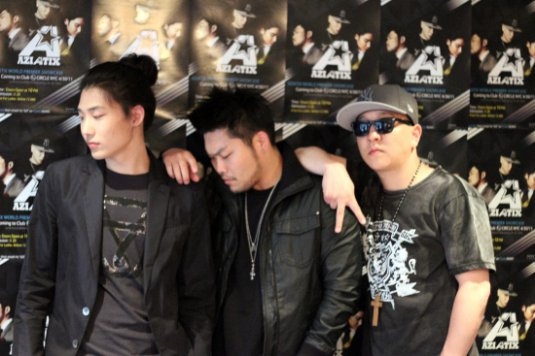 The new group Aziatix sure has been busy lately. Just over the past weekend a few noteworthy pieces of news came about regarding the trio.

First bit of news is that the R&B/hip-hop group has further advanced into the international spotlight as their single “Go” as well as their self-titled EP are now available for download via Japanese iTunes. If you live in Japan, are an Aziatix fan, or a fan of any music, for that matter, be sure to give them some love. Their music can be purchased here.

On June 10th, a photo surfaced of Aziatix’s Nicky Lee and producer Jae Chong with two out of the four Far East Movement members. This photo was captioned, “‎Nicky Lee and Jae Chong with Far East Movement! Aziatix ALL DIDDAY!!! Ma Boyz…Far East Movement and Nicky Lee…” Not much else was said about the encounter. But this surely is a sign that they are continually making progress in the music scene as they are getting recognized not only by music fans but musicians as well. Branching out and meeting other musicians is a step in the right direction.

Lastly, the Aziatix boys released an interesting behind-the-scenes video of them chilling in the studio. Where they greeted their fans, not only verbally but they had a treat for viewers as they broke into song! They ended up doing an amazing cover of Chris Brown’s “Look at Me Now”. The video was uploaded to YouTube not too long ago, but now it is also available on the Korean web portal Nate and is up for all to enjoy. You definitely do not want to miss this one! It makes one even more eager to what else the guys have up their sleeves in the not-so-distant future. Be sure to check the video out here.

What do you think of Aziatix’s recent goings-on? Did you enjoy their impromptu cover? How about meeting with Far East Movement? Or what about them trying to break into the Japanese market? Are you excited?

Aziatix
FAR EAST MOVEMENT
How does this article make you feel?