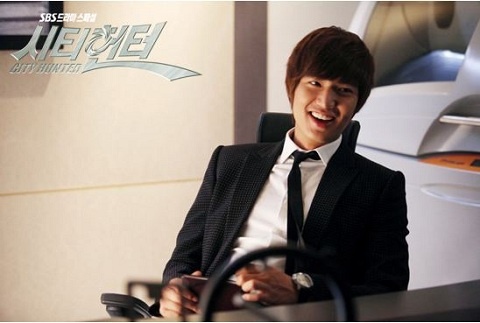 SSD released a new set of teaser photos for the upcoming ninth episode of “City Hunter.” Lead actors Lee Min Ho and Park Min Young confirm their love for each other with a passionate kiss under a dimly lit streetlight.

In the stills, Lee Yoon Sung (Lee Min Ho) leans in for a kiss and delicately touches Kim Nana’s (Park Min Young) face as they fall into the moment. Viewers were left hanging in the last episode when the two almost kissed before his father, Jin Pyo (Kim Sang Joong), interrupted with a phone call. This upcoming kiss scene was filmed last Thursday and is already dubbed the “3 step streetlight kiss.” The darkness, along with the single dim light, made the kiss even more romantic and ethereal. In a way, the setting symbolizes the fact that when the two are together, both can forget their painful pasts and get lost in each other.

The two actors finished filming the kiss scene without any particularly funny NGs. Those on set have already complimented Lee Min Ho and Park Min Young several times for their perfect on-screen chemistry. Producers stated, “Yoon Sung is torn between his duty as the city hunter and love for Nana gets bigger and bigger.”

“City Hunter” is based on the popular Japanese manga by Hojo Tsukasa and is the manga’s first drama adaptation. Protagonist Lee Yoon Sung works in the Blue House National Communications Team to spy on the President and his advisors. His ultimate goal is to hunt down the “group of five” who were responsible for his biological father’s (Park Sang Min) unjust death. “City Hunter” will air its ninth episode tonight on SBS at 9:55PM KST.