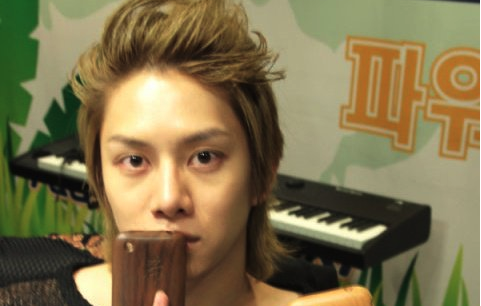 Universal star Kim Heechul of Super Junior recently formed a project group M&D, short for “Midnight and Dawn,” with labelmate Kim Jungmo of TRAX. Soompi reported earlier that the two will be releasing their first song together called “Close Ur Mouth.”

As if our universal star hadn’t proven how multi-talented he was already, Heechul has ventured into newer areas of entertainment to do just that. Kim Heechul directed, starred in, and individually casted the co-stars of the music video himself. Along with Heechul, F.T. Island’s Choi Jong Hoon and Lee Hong Ki, Supreme Team‘s Simon D, comedian Kim Kyung Jin, miss A’s Jia, and Beast‘s Yong Joon Hyung will also be making appearances in the music video. (Chocoball party?)

Kim Heechul has been very active in the entertainment outside of singing, working as a DJ, MC, and actor. This time he took a first step in writing lyrics. A bit of Heechul’s wit was included in “Close Ur Mouth” through lyrics such as, “Should I dance for you, should I spit some words of rap, should I bring it with rock.” The song is about a guy trying to let go of a girl in a nonchalant and cool manner, and Heechul’s 4D-ness seems to have made its way into the song. (Heechul was #1 on last week’s “Idol Chart Show: Martian Idol Special”)

The music video for “Close Ur Mouth” will be revealed on the 23rd.
Come back to Soompi for more updates about M&D!

And for those of you who haven’t heard it yet, here’s the audio teaser for “Close Ur Mouth.“

Super Junior
Kim Kyung Jin
M&D
How does this article make you feel?