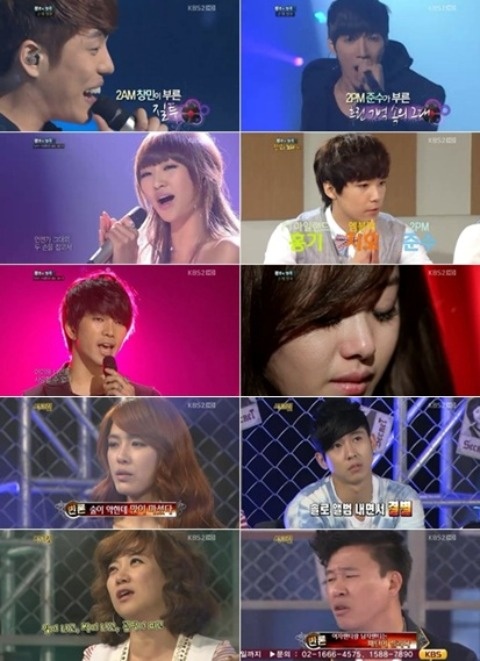 KBS 2TV‘s ‘Declaration of Freedom Saturday,’ a segment which contains both programs ‘Immortal Song 2′ and ‘Secret‘, have been noted of receiving the lowest viewer ratings during the Saturday variety show period. The segment had always been known for it’s low ratings, but this week’s episodes confirmed their status.

On the 26th, percentage experimenting company, AGB Nielson Media Research revealed that on the 25th, ‘Declaration of Freedom Saturday’ recorded a mere 6.3% in viewer ratings, MBC‘s ‘Infinity Challenge‘ chalked up 17.4% and SBS‘s ‘Star King’ hit 13.3%. Declaration of Freedom Saturday plunged 0.6% in viewer ratings compared to last week’s 6.9%, which wasn’t that great of an achievement either.

In this week’s installment of Secret, celebrities like After School‘s Kahee, singer Brian, and gagwoman im Sook all appeared in the show, and yet contrary to high expectations, failed to raise the ratings whatsoever.

What are your thoughts to this issue? What do you think needs to be changed in order to lift the viewership?

Secret
Immortal Songs
How does this article make you feel?