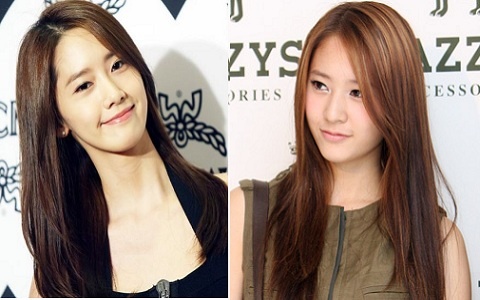 Currently, many internet communities are abuzz comparing the similarities between f(x)’s Krystal and Girls’ Generation’s (SNSD) Yoona. The two are quickly becoming the next hot topic in celebrity doppelgangers. Early this year, Yoona and Japanese model MONA were the talk of the town for their strikingly similar appearances. Even then, many were arguing that Krystal looked more like Yoona than Mona did.

Since her debut, Krystal received much attention for resembling Yoona more than her real sister Jessica. In a past interview, Krystal stated, “I’ve heard so much talk about how I look more like Yoona unnie than Jessica unnie.” The topic has come up again, and many netizens overwhelmingly pointed out that as she matures, Krystal is looking more and more like Yoona. It’s no secret that the two share some identical features and built up a similar image – appearance wise. We all know Krystal and Jessica are sisters, but who do you think looks more like Krystal’s sister – Jessica or Yoona?

Doppelganger
f(x)
Jessica
Krystal
twins
YoonA
How does this article make you feel?