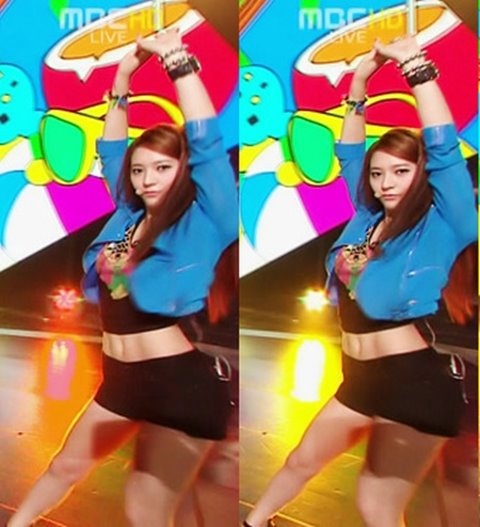 Recently, f(x)‘s Krystal has been a hot topic among netizens.

Last month, netizens were under the charms of SNSD‘s Yuri because of her toned abs and sexy figure. Looks like Krystal can now show off her enviable and curvy silhouette, too, as she now is in the spotlight, thanks to her abs.

A topic titled “Krystal’s 11-Shaped Abs” has been all over discussions portals and forums with attached pictures of f(x)’s Krystal.

The screen shots were from f(x)’s recent performance of “Hot Summer“ on July 2nd, on MBC‘s Music Core. In these pictures, Krystal was shown standing in a sexy pose, arms raised up, and looking intensely at the camera. This allowed her to show off her abs and reveal her sexy S-line.

Netizens commented about Krystal’s abs, “These days Krystal seems to be the trend,” “Her abs are a work of art. She’s talll and slender, she holds the world in her hands,” “She definitely is in the TOP 5 of the best idols,” and “As time passes, I begin to like her more and more.”

In the past, Krystal had also been the center of attention because of her strong and firm abs, during f(x)’s “NU ABO” promotional activities.

Currently, Krystal is currently appearing on SBS‘s variety program “Kiss and Cry,” in which Olympic medalist Kim Yuna is the MC.

What about you? Are you impressed by Krytal’s abs?

Sources : Newsen via Nate & My Daily

abs
Hot Summer
Krystal
s-line
How does this article make you feel?