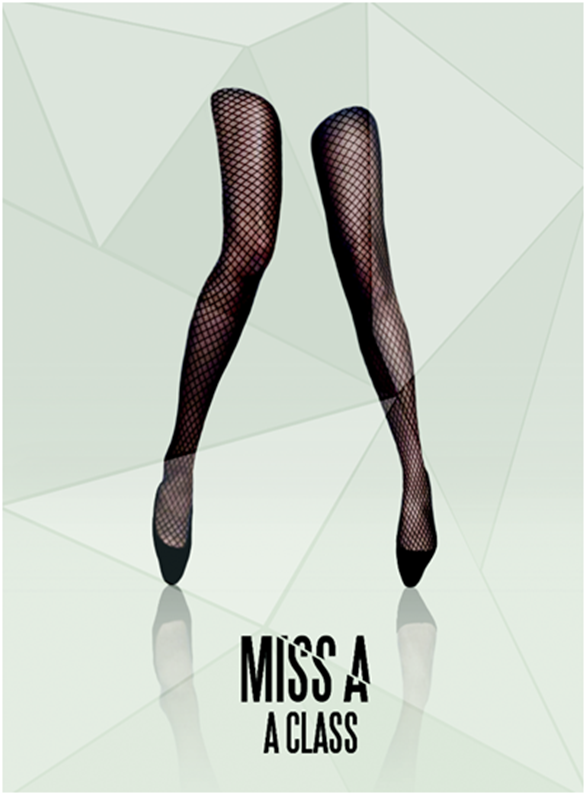 Soompi is bringing the fans an exclusive album preview of the new miss A album “Good Bye Baby.”

The new album consists of 13 total tracks, five of which are new songs (includes one remix version of “Good-Bye Baby”).

I have told you before I am a sucker for piano beats and this is another great song with that melodic piano beat that immediately grabs you. The song itself has a very soothing sound, a piano melody throughout with a snare drum beat but is dominated by vocal sounds.

The song starts with a piano intro which is followed by a snare beat and miss A singing “Aaahhh, aaahhh, aaahhh….” Min starts off the first vocal set which is followed by a stronger voiced verse by Suzy. The second verse starts off with Jia and has Fei follow. The song has an interesting mix of all four voices, each with their own unique vocal sets. The chorus isn’t sung by the group but the individual’s trade off the vocal verses. The ending of the song has a slightly different style than the first as there is more over-lay between the vocals.

I felt that this song was different than anything they have already produced. It has the same soft feeling and catchy tune as their latest hit “Love Alone.” What I liked about this song is that their vocal sets had an over-lay effect at many points towards the end of the song. It was great to hear members hitting higher notes in the background while the foreground has vocal sets being sung in perfect unison. This was a great song to have as the first track.

The featured track on the album is “Good-bye Baby.” We haven’t received too much information about this song in the teasers aside from the chorus. The song starts with a funky beat which we actually got to hear from JYP, Park Jin Young, himself on his me2day account. If you missed it check it out here.

This song has a much more upbeat quality to it. Once again it is great that AQE/JYPE do not drown out the vocals with the beat and instrumentals. Jia opens up the first and second verse which has Fei following and a chorus which is sang by all the members. In the third verse we also get to hear Jia rapping a short set.

Throughout the song “Good-bye baby good-bye” is very prominent but it’s the chorus and lyrics which will have you humming along. The vocal sets, sang in unison, have a drawn out rhythm to it which is actually what stuck with me even after the song was over. Throughout the song you have a constant beat but what I liked was the hint of an electric guitar heard occasionally after the chorus. Overall I would say this song has a very JYPE feel to it and is rightly picked as the album title song.

As an extra teaser we were also given the chance to watch the studio dance routine of “Good Bye Baby.” I can’t reveal too much about the specific dance moves but can say that the routine is very well coordinated with the lyrics of the song. I was pleased to see that the dance has an eye catching beginning but the choreography stays very classy, complementing the music. I am always amazed to see such perfection because it means they have practiced hard to achieve perfect unison and mirror image quality.

As soon as I heard the intro and beat to this song I loved it. It reminded me of an old school beat and more like the beats we hear coming from production studios in the States. The song works off this old school slower love song vibe with toned down vocals.

It is difficult to say it has an old school sound, as I am not that old, but the sound is different than what we hear nowadays and more like that I heard growing up. I was surprised that the title was “Help Me” instead of “I need your love” which is heard repeatedly in the chorus sets. What I remember the most were Min’s great love song styled vocals which complement her vocal style. As I am only getting to listen to the song a few times I can only remember what stuck out in my mind but aside from Min all the members had great vocal sets. The song itself has a relatively slow melody and falls into that slow love song mood.

“Mr. Johnny” starts out with a funky electronic beat and Miss A singing “Hey Mr. Johnny hey Mr. Johnny. . .” The song has a club vibe to it with a constant base beat and electronic music features.

This is another upbeat song made for the club: it’s got beat, techno styled build ups and rapping (by Fei). Interestingly enough the title use of Johnny is very similar in sound to the Korean word for thrill/electrify (jjang), jjang ee da (to be thrilling/electrifying). This is actually a great word to describe the song itself all though there is no connection between the two. My feeling was that the song went more and more club like as the song went on with some voice shout-out feature (“eh, eh, eh….”).

This is an interesting remix of “Good-bye Baby” and is in a completely different style as it is much slower. The focus of the remix, which is great, seems to be the vocals. The vocals are slower and not at all drowned out by any beats as the electronic background music is very low and mellow. The two versions are both good in their own way but dependent on your own mood as to which you would want to listen to.

The other songs on the CD include previous hits/singles, packaged together with these new hits it is a great purchase. Check out the great track list below which includes information on each track from JYPE:

I. This is a track based on synthetic bass sounds. It’s a pop dance track that describes the broken heart of a woman who loves a guy but her wounds deepen as time goes by. She’s exhausted by the broken love and that’s well-expressed throughout the song that starts with an emotional piano sound.

I. The title track Goodbye Baby is about this girl who dumps her player boy friend. With the song’s powerful hip-hop beats and acoustic shuffle soul sound, it leaves a strong impression on listeners. In particular, in the early part of the song, it says, “When you keep calling me Suzy when my name is not Suzy” adding to the listening pleasure. The overall song has a addictive melody and strong hip-hop rhythm, and the powerful drum sound that feels like pounding your chest + miss A’s perfect dance coordination enhance the song’s dramatic sound, making it a miss A style dance track.

I. Is a sexy and sweet styled song with a combination of urban and south drum compositions. The lyrics are actually humorous: a woman quickly realizes that she fell in love and goes up to the guy and asks him out.

II. “Break It” is a song with a blues style and acoustic guitars. The lyrics for the song have rhymes that are alive and cute. The song features miss A’s uniqueness and own color.

II. This song talks about a girl who will follow her heart even if she’s attracted to a bad boy, a charming girl that will confidently express her emotions if she wants to love. During the chorus the words “Mr. Johnny” is repeated and adds fun to the similar song, “Jja Rit Jja Rit.” Also the song changes from a dance rhythm to a hip hop rhythm during the chorus.

II. This is a dance song that features the charms of producer Super Chang Ddaie. The song is a combination of sad lyrics, where an individual is asking the DJ to play a song that will help in reminiscing about an ex-lover and also an upbeat beat. The song expresses its sadness with a catchy melody, synth instruments, and miss A’s awesome vocals.

II. Through this track, the listener can meet a fun and hip-hop style miss A. There are upbeat clap sounds that are mixed with a hip hop beat that has a reggaeton vibe. The song is a meeting between hip hop, R&B, and miss A.

II. “Breathe” is a reggaeton song made with miss A style. If “Bad Girl Good Girl” was a melodic European hip hop song, then Breathe is a song that is focused on rhythm. “Breathe” features miss A’s powerful performance and also an upbeat reggaeton rhythm that will captivate eyes and ears.

II. The song reflects how miss A musically matured. In the beginning part of the song, you can feel the charming voice tone of each member, and toward the ending, there is impressive arrangement that expresses the emotions of a woman who can’t accept the breakup. The song comes to an end with a blend of each member’s outstanding vocals.

I. Created by Super Chang Tai (specializes in electronic)

II. This is a fun and dramatic song which sporadically has 8 different beats within the song.

I. Lyrics by Ursula Yancy who wrote Rihanna’s “Skin” and produced by Fuego and Ursula Yancy

II. Song completely in English – shows off members’ “perfect” English and allows international fans to appreciate their music. It has a pop style and trendy dance music vibe. The song describes a girl confessing her love.

I. Produced by JYP

II. This song was to portray to have very confident, strong qualities – perfect song to show the world what this new group is all about. The song itself has very European like melody, strong American hip hop rhythm.

I. The song has a distinctive intro – introduces song like a musical. Various instruments were used to create a simple but wild sound for a uniquely sexy, uniquely miss A sound. The remix is totally different from original – different vibe with minimal sound, but emphasizes the members’ strong vocals.

Visit and support miss A at these various sites:

If you wish to use any of the content (excluding YouTube clips, track list may also have other noted sources ours is AQE) for this album preview of “Good Bye Baby” please receive written permission from Soompi by emailing sormark@soompi.com. This is considered to be exclusive content of AQ Entertainment, JYP Entertainment and Soompi Inc.

Suzy
Fei
Jia
Min
miss A
How does this article make you feel?