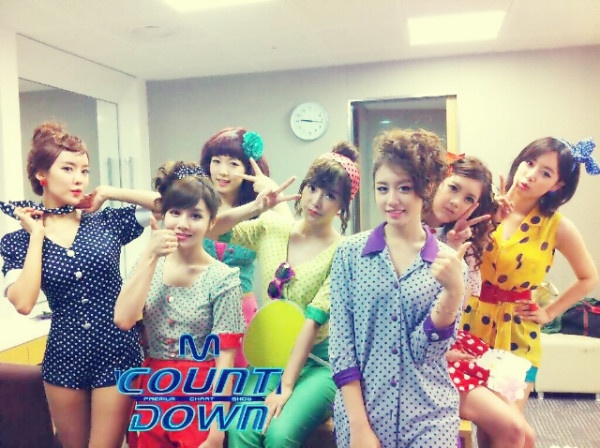 T-ara ‘s “Roly Poly” was named the “Song Of The Week” on M Countdown. These girls have what it takes to make “groovy” hip all over again. Who else can make this time period hot on the charts?

2PM were the winners’ last week on Mnet. The 20s Choice aired on July 7th, but the show announced on their website that the JYPE boys won the triple crown for “Song Of The Week”.

Everyone made their comebacks/debuts on today’s edition of M Countdown! MBLAQ, ZE.A, J.ae, Girls’ Day and The Grace- Dana &Sunday all returned after a long hiatus of artistic, surprising, and just plain second chance love music. HyunA made her return to the stage after performing new tracks at the 20s Choice last week. Kim Hyun Joong expressed his affection for fans through a brand new single and Japanese girl group, Domino, made an early debut on the popular cable network’s fiery spotlight.

MBLAQ – Mona Lisa and You Know

HyunA, do you have some gum? Yes, the “Bubble Pop” [ bonus track “Attention”]

Kim Hyun Joong is rewarding his fans today with a little “Kiss Kiss”!

A Pink – It Girl (Goodbye Stage)

Girls’ Day – Hug Me Once