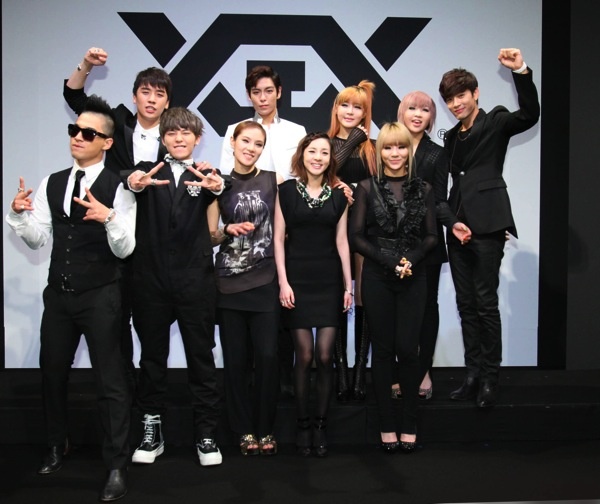 At the press conference held on July 21st in Tokyo for the launch of “YGEX,” a joint label between YG Entertainment and Japanese powerhouse Avex, Big Bang showed their support for Daesung and hinted at the possibility of a Japanese solo album within this year.

“We really wanted to come here with Daesung, but unfortunately, he couldn’t make it,” G-Dragon said in front of more than 400 press members from some of the largest Japanese media such as Yomiuri News and NHK. “We are a team with Daesung, so even when we don’t directly say it, we’re supporting each other in our hearts. We’ll do our best to come back as all five as soon as possible.”

Big Bang’s leader also addressed questions about the group’s upcoming Japanese album. “Since last year, Big Bang has promoted solo, unit, and group albums simultaneously. I think we’ll be able to return in solo and unit albums to Japan starting from the second half of this year,” G-Dragon said. “We’re undecided on who would first come out with an album yet, but whoever has the best final product will first start Japanese promotions.”

T.O.P. added, “Through YGEX, we believe we’ll be able to show a lot of different sides of Big Bang.”

“YGEX” is a new label jointly created by YG Entertainment and Avex. According to YGEX’s official website, the name “YGEX,” is an “attribution to the collaboration between YG Family’s ‘YG’ and Avex’s ‘EX.'” It says, “’EX’ also inspired by words like ‘EXCLUSIVE’ and ‘EXCLUSIVE,’ carries connotations of it being the one and only label you can experience YG FAMILY.”

Also present at the press conference were all four 2NE1 members, Gummy, Se7en, and the head of YGE Yang Hyun Suk. Starting with the release of 2NE1’s Japanese debut album in September, YGEX will begin fully promoting YG artists’ Japanese albums, including those by Big Bang, Gummy, and Se7en.