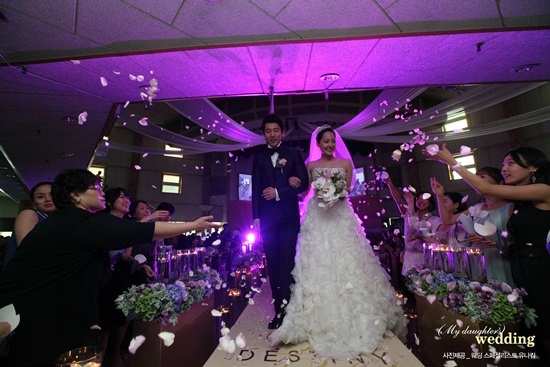 On Saturday July 23rd, Eugene and Ki Tae Young tied the knot at a small church just outside of Seoul. Aside from the beautiful couple, fans could not take off their eyes off of Eugene’s gorgeous dress. The wedding dress was designed by famous designer Monique Lhuillier, a Hollywood celebrity favorite for both wedding and red carpet event dresses. She’s dressed stars like Britney Spears and Reese Witherspoon at their weddings. Her long list of clientele includes Angelina Jolie, Gwyneth Paltrow, Scarlett Johansson, Kristen Stewart, and others.

My Daughter’s Wedding, the company that imports foreign designers like Monique Lhuillier and others, stated, “Eugene’s dress was created after months and months of hard work. Her veil was custom-designed for her.”

Big Bang’s Taeyang and ZioN sang the congratulatory song at the wedding ceremony. It’s been said that Taeyang, who attends the same church as the two, personally wrote the music and lyrics for “This Moment” for the couple. Meanwhile, the happily-married couple is off to Europe for three weeks to enjoy a romantic honeymoon.

*** Editor’s note: Apparently, Taeyang’s video was not from the wedding but from a previous event. We’ll update with a video once it becomes available. We apologize for the inconvenience!