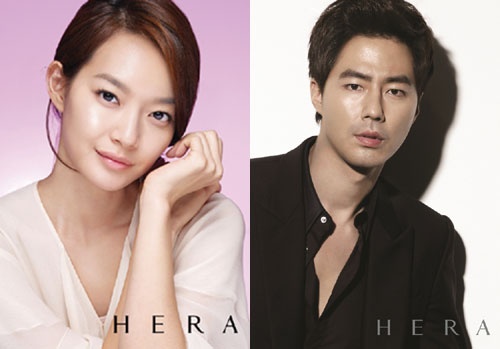 On July 25th, Amore Pacific stated, “Shin Min Ah is ‘Contemporary Asian Chic’ that 20~30 something women like to follow, and she is an icon of this generation. We believed that she would be able to represent Hera the best.”

Also, “After being released from his military service, Jo In Sung has shown a classy and confident image. He is also the leader of trends for this generation and represents the professional image of Hera’s Men.”

Shin Min Ah and Jo In Sung will both begin to represent their brand beginning from August.

Shin Min Ah had recently appeared in “My Girlfriend is a Nine-Tailed Fox” also this month in July she has been going to information sessions on the film “Sisters On The Road.”

Jo In Sung is currently appearing on the crew/rowing special for “Infinity Challenge.”

Jo In Sung
Shin Min Ah
How does this article make you feel?