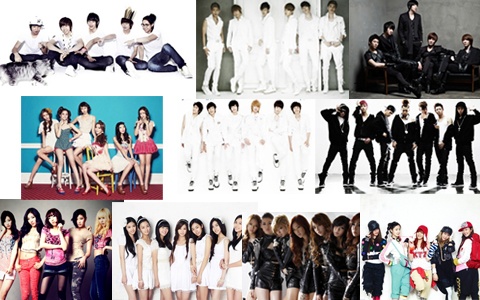 There have been quite a few rookie groups who have made their debut over the past seven months. But is it too soon to pick one male and one female group that has had the best debut? MTV K doesn’t seem to think it is as they recently conducted two separate polls, one for the ladies and another for the fellas, to determine which girl band and boy band had the strongest debuts of 2011.

MTV K started things off with the girl groups as they narrowed down the selection to five of the most promising female debuts. Making the list was: Dal Shabet with their debut track “Supa Dupa Diva” and bonus points “They have a ★ in their name. Duh.”, next was Co-Ed’s sub-unit 5 Dolls with two debut tracks “I Mean You” and “Lip Stains”, RaNia and their debut track “Dr. Feel Good” they received bonus points for “Pushing the limits of K-pop standards of sexiness.”, Brave Girls with “Do You Know”, and last but not least A Pink with their track “I Don’t Know”.

The winner was chosen by the public through a poll held on MTV K’s website and was awarded to the group with the most votes. And the winner for the ladies was the incredibly sexy, controversial, and talented RaNia.

Not long after it was the guys turn, again there were five possible candidates to choose from. The strongest guy groups were: Block B with “Freeze” bonus points for “Attempting to bridge the gap between hip-hop and pop. These kids got swag.”, X-5 and their debut “Don’t Put On An Act” and bonuses for “Being. So. Tall.”, fellow MTV K “Match Up” stars B1A4 and their song “O.K.” points for “Pulling off the boys-next-door image oh-so-perfectly.”, the adorable Boyfriend and their track of the same name and points for “Identical twins!!!!!!”, and the fifth selection was the group with the most recent debut HITT and the song “Good Night” they get points for “Their strong live performances. And their role models are TVXQ.”.

There were many talented groups to choose from but after the poll closed the award for boy group with the Strongest Debut of 2011 went to the also super talented Block B!

Congrats to RaNia and Block B! Do you agree with these selections? Who would you have voted for? Do you have any writes-in of your own for the group with the strongest debut of 2011?