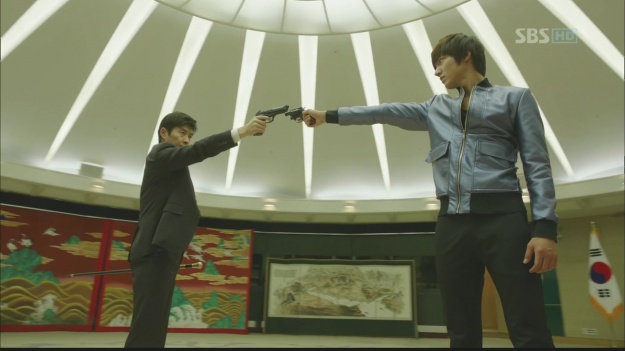 Click Here to See the Recap for the Previous Episode!

We are at it, the final episode of City Hunter! Damn I really liked this drama!!! Also, I am so sad to see the characters say goodbye~ Let’s quickly get down on this recap!

We find out that JP had texted YJ to come and get the secret document. Yoon Sung says that JP has pretty much killed innocent YJ. JP tells Yoon Sung that he is going to kill Target Number Four.

JP finds Target Number Four at some kind of docks.

JP tells Yoon Sung that he looks forward to seeing Yoon Sung when he finds out the true and ugly side of the President that he respects so much.

The President is having a press conference about these allegations, he denies all of them.

The ex-officer is with JP asking that he just return honor to the dead of the “Wipeout Plan.” The ex-officer doesn’t want to see the whole nation become shaken.

The next scene shows Sehee crying at YJ’s funeral. It looks like Target Number Three has waked up.

YJ’s supervisor promises that he will finish everything YJ wanted to see done. The President also arrives at the funeral.

Yoon Sung is at the funeral as well. YJ’s underling goes crazy on Yoon Sung, calling him the City Hunter and blaming Yoon Sung for YJ’s death.

Nana is waiting at Yoon Sung’s home. She asks if Yoon Sung is going to find out dirt and “take out” the President like everyone else. Nana doesn’t want Yoon Sung to do anything he will regret.

The President is talking with a senator in order to pass the law to decrease tuition costs he wants.

(Yoon Sung has sneaked in and is talking to the President, asking why he is so good at making deals.) Yoon Sung says that he will make the President regret this decision about trying to pass a law while making shady deals.

Dahae is depressed. She laments about how YJ’s death is so sad.

Yoon Sung has arrived at the President’s home saying that he is tutoring Dahae, Yoon Sung is looking for the President’s diary that has the information about the funds received during his candidacy days. The President finds Yoon Sung and asks him why he’s doing this. Yoon Sung says that it is because of faith. Faith of a better country etc.

The president offers the diary to Yoon Sung, and says “Yoon Sung I am sorry as a father for having let you live such a life.”

Nana is outside and asks Yoon Sung if he is going to continue on with his course of action. Yoon Sung, “I’m the only one who can do this, I need to do it.”

Right at the moment of the President’s victory in passing the tuition reduction, the City Hunter has released all information about the “Wipeout Plan” and also the illegal ways he has gathered funds for his presidential candidacy.

The President finds out that the Korean senate is calling for his impeachment.

The City Hunter also has sent the senators who have received illegal funds in order to pass the tuition decrease law to the prosecutor’s office. (Now everything is set up, the President is broken and now it seems JP will step in and assasinate the president.)

JP and Yoon Sung prepare for the final showdown.

It seems that Yoon Sung was trying to get Nana out of the upcoming conflict, she has been put off-duty when her personal diary says otherwise.

JP calls the President and says it is time to receive my judgment instead of the people’s judgment.

The President asks Nana’s supervisor that he has an important guest and wants him to be sent in without any body-checks. Also, the President wants to be left alone.

JP arrives at the meeting place of the President and he has a face-off with Yoon Sung. Yoon Sung, “A ruthless vengeance where I have to kill my biological father. Do you think I can be fine after it’s done? Do you think I’ll be fine after having to point a gun at the woman I love? What do you think it would be like, to have to face off against the father who lost a leg to save me? I wished that you would stop this just thinking about me for once. I just wanted to live with you happily. But, it was all just a dream.”

Yoon Sung ends up pointing the gun at himself. If this is my own destiny, I’ll end it myself.

The President pushes Nana aside saying “I am sorry Nana.”, the moment JP fires, Yoon Sung takes the bullet for the President. Nana also shoots JP.

As JP dies, he reaches his hand out for Yoon Sung. Father and son hold hands one last time, much like Yoon Sung’s dreams scene (Of course in the dream it was Nana instead of his father.)

We don’t know how many days it has been but Nana is seen at Dahae’s café. We learn that Nana’s father has passed away.

Also, Ki Joon and Nana’s partner ended up getting hitched.

Nana appears before Yoon Sung with a carrier bag and the two are smiling at each other.

Also, there is a memorial stone erected for those who have died during the “Wipeout Plan.”

The final scene is of Yoon Sung driving off into the city night.

I heard that some Korean Netizens online have stated that they believe the happy ending is all in Nana’s head. I highly disagree with that, because we know that this is kind of a prequel setup for City Hunter the comic series. Anyways, JP in the end sacrificed himself once more for Yoon Sung, in true fatherly fashion. I liked how the dream scene was reenacted, and JP dies an honorable man, at least in Yoon Sung’s mind.

Phew these last two episodes were too much for my heart. I almost died of heart attack because of all of the suspense.

*Just to let you guys know because there seemed to be confusion over the ending, City Hunter’s PD stated that Yoon Sung does survive after all. The ending scene of him driving off into the city night is just showing the “City Hunter’s” will against injustice. Whatever that means, lol.

The last scene is just kinda showing that the “City Hunter” is still kicking and his will to fight injustice hasn’t stopped as of yet, (I’m assuming)

Read the translation for yourself here

jbarky is a senior editor for soompi.com. (Also the BEST) You can email him at barkjason@soompi.com, orfollow his twitter.com feed at @jjbarky