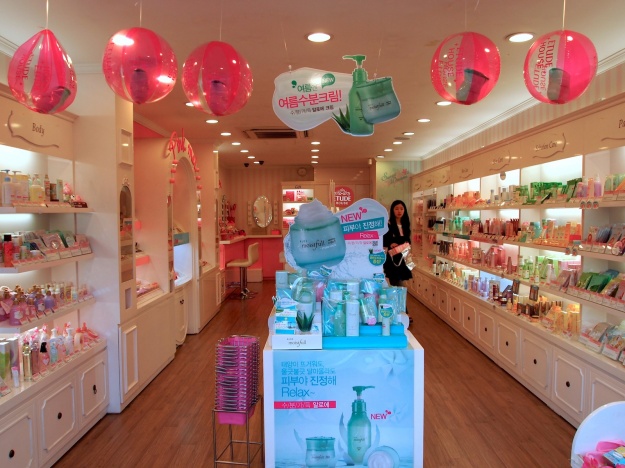 If you’re in Korea and you want to buy some affordable cosmetics, you won’t head to your local pharmacy to browse the latest L’Oreal and Maybelline lipsticks. What you’ll probably do is head to the nearest Missha, Face Shop, or Skin Food chain store (whatever your preference, these stores can be found all over) and allow a sales assistant to help you select some items suitable for you. In this series, I’ll cover the major beauty shops: their concepts, bestsellers, and of course, which celebrities endorse them. For this edition, I’ll discuss the Sandara Park-fronted brand Etude House, which was founded in 1995 and opened its first store a decade later.

If your style is cute and feminine, and you can’t resist prettily packaged cosmetics, Etude House is the brand for you. The store’s distinctive faux pink roof overhangs an interior that’s as sweet and irresistible as cotton candy, and the store abounds with posters featuring a smiling Sandara Park, who eschews her crazy 2NE1 image in favor of a girlier style.

Here’s Sandara, with the rest of 2NE1, shilling for the lash treatment Dr. Lash Ampule Long&Volume. I’m not sure it was meant to be scary, but it kind of freaks me out. Dr. Lash, by the way, is said to give longer, fuller lashes in four weeks.

Past models include Park Shin Hye and Go Ara. Here’s the former advertising lipstick alongside Lee Min Ho (hoping for a kiss).

Etude House’s top bestseller is the Moistfull Collagen Cream, which despite its odd name has sold 2 million units in Korea. Containing baobab tree extract and marine collagen, this product promises long-lasting fresh moisture. The cream has kind of a creamy-watery consistency and absorbs into the skin quickly, leaving the skin feeling hydrated but not sticky. Fragrance-phobes beware, as the cream does have a distinct scent, but it’s neither too strong nor completely unpleasant. Along with the original, it also comes in soothing aloe and whitening formulations.

Other hot products include:

– Precious Mineral BB Cream SPF 30, which apparently sells one unit every ten seconds(!) and combines a brightening pearly finish with a powdery texture for a fresh-faced glow that lasts all day.

– Henna Fix Proof 10 Mascara. This was the first cosmetic pointed out to me by the salesgirl, and I’ve seen it featured in magazines as well. It’s a waterproof, smudge-proof mascara which comes in lengthening and curling formulations.

– Dear Darling Tint (see what I mean about the super cutesy styling?). This is a gel-like lip and cheek tint that comes in wand packaging. At 4,000 won ($4), this is super cheap for a product that promises to impart a natural color to your lips and cheeks! It comes in Berry Red, Real Red, and Orange Red.

Note that I haven’t tried any of these products yet, so I can’t really vouch for them! The product I did end up buying was a combination blusher and highligher called (somewhat cheesily) LUCIDarling Over the Rainblusher. The bottom portion of the palette is the highlighter, and the top part is the blush! It has a distinctly flowery scent. I’ve swatched both the highlighter and the blush below. The highlighter gives a nice pearly glow, but the blusher appears kind of unsatisfyingly faint here. The color is a lot more apparent on the face, but those of you who prefer really pigmented makeup will still probably want to give this a pass.

As anyone who’s ever shopped for makeup in Korea should know, you usually get a freebie when you make a purchase. What you get appears to be at the discretion of the saleslady. Well, this time, after purchasing the palette as well as a nail polish remover, I kind of got gypped! I received two large pink packages… which turned out to contain some cotton pads and a deflated plastic beach ball (great for all the times I never go to the beach).

Oh well. I’ve had better luck with freebies at other stores, so let’s see what next time brings! That’s it for this week!