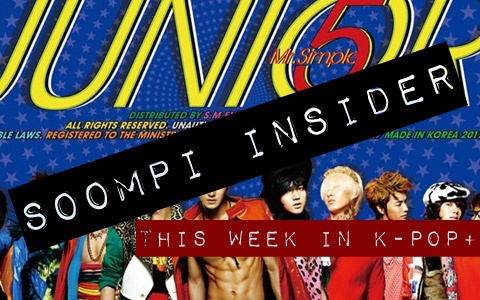 This week was all about hot bodies, whether it be breasts, butts, nudity, or bikinis. Bodies were also the source of controversy & discussion, as Siwon’s underwear-clad promo photo for Super Junior’s comeback made us examine if perhaps male idols are able to get away with more than female idols in terms of exposure and suggestive dancing. HyunA having to abruptly cut short her “Bubble Pop” promotions for her “sexually explicit” dance added fuel to this already heated debate.

With all this focus on beautiful bodies, it could be hard for the rest of us to feel good about ourselves. 2NE1’s CL shared her positive message of having confidence and loving yourself for who you are, while MBLAQ inspired us with their secret donations to great causes.

On the music front, Super Junior took over K-Pop with their new album “Mr. Simple.” The music video for their title track is nearing 3 million views just 2 days since its release, taking the worldwide #1 spot for ‘most discussed’ & ‘most favorited’ video on YouTube as I type. Even their comeback performance on Music Bank made both the ‘most liked’ and ‘most favorited’ charts.

Other popular topics this week were G-Dragon’s new hair cut, Park Shin Hye as Jang Geun Suk’s mom’s choice for a daughter-in-law, and a Survival: I Am a Singer parody called Survival: I Am a Rapper, setting up our favorite idol group rappers against each other. Heartstrings continues to be the #1 drama in our community.

Soompi had an exclusive video and photo contest with 2PM in which our members were asked to create an original video or photo that represents the concept of “Hands Up”. There were so many awesome entries that 2PM looked through themselves and helped judge, and the winners were finally announced this week. Here are a couple of my personal favorites:

Finally, happy 4th anniversary to the lovely ladies of SNSD! We’re celebrating the occasion with a feature on their style through the years, from debut till now, and a special SNSD-edition of Songs Impossible to Listen to with a Straight Face Anymore Because of K-Pop. Our friends at Soshified had a video message placed on a digital billboard in downtown Los Angeles congratulating the girls on this milestone. SNSD continues to rule as the most popular thread in the forum.

This is the perfect video of the week as it touches upon 3 relevant topics – You’re Beautiful (last week’s DVD giveaway), SNSD (4th anniversary), and Heartstrings (Jung Yong Hwa + Park Shin Hye). It will also make you pee in your pants laughing.

Notables:
First time a makeup tutorial has made it to the chart, as well as the 2nd showing of the fanfic An Eternity of Eclipse.

First off, last week’s winner is .liza., whose favorite K-Pop moments last week were Super Junior’s comeback photos and Park Shin Hye recovering from her accident – congrats! Message me on Twitter so I can send you the You’re Beautiful DVD Set!

This week’s giveaway is the collector’s edition of Super Junior’s 5th album, Mr. Simple, which includes 10 LP-sized member photos (12×12 in). It’s easy to enter – do it now, and tell a friend!

Pic spam of the week: the pig-rabbit makes an appearance