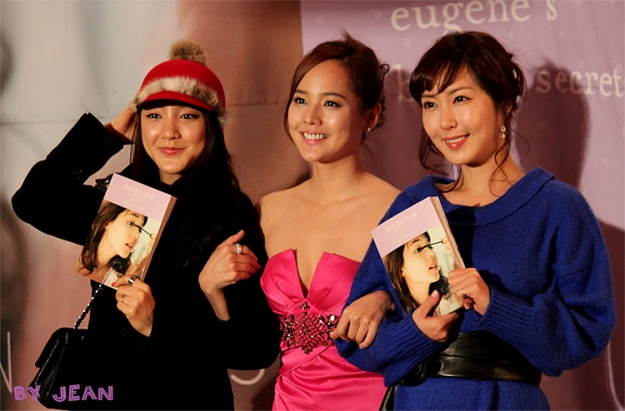 Where Are They Now: SES

Remember SES? The popular trio, consisting of Sea (Bada), Eugene, and Shoo, debuted in 1997 with the hit single “I’m Your Girl.” SES is generally thought of as the first highly successful K-Pop girl group and the female counterpart to their SM labelmates, HOT. (Given their SM background and their cute and classy image, I also personally view them as the forerunners to today’s chart-topping girl group, SNSD.)

Here are a couple of their popular hits, “I’m Your Girl” and “Dreams Come True.” Depending on your age and attitude, these will either give you a wave of nostalgia, or they’ll just make you feel thankful for the advent of HD.

(SNSD paid homage to the trio by performing this song. It’s a fine cover, but I get confused when I watch it because there appears to be an extra girl in the mix and that just throws me off.)

Anyway, after several successful albums, SES disbanded in 2002 and went on to do their own things. Where are they now?

If you follow Soompi at all, you probably already know that Eugene still leads a very high-profile lifestyle, not surprising for someone who was widely considered to be one of the most beautiful idols back in the day. Immediately after leaving SES, Eugene starred in a string of dramas, appeared in lots of CFs, and released a couple solo albums. She’s better known today as an actress than a singer, but she also has experience MCing. Today she hosts a beauty show on cable channel O’live called “Get It Beauty;” in this role, she has written two beauty books. As if that wasn’t enough, Eugene also presides over clothing brand byMOMO.

After briefly dating Park Yong Ha, Eugene married actor Ki Tae Young, who starred opposite her in the 2009 drama “Creating Destiny,” on July 23, 2011, after a year and a half of courtship. And yes, Bada and Shoo attended her wedding!

Unlike her bandmates, Shoo stayed with SM Entertainment after SES broke up. As a solo artist, she contributed to a couple SMTown albums, but eventually left and joined JIIN Entertainment in 2006, the label which had also signed Bada. Under JIIN Entertainment, she focused on musical theater rather than a recording career, starring in the hit Korean adaptation of “Bat Boy: The Musical.” However, later that year, she announced that she would end her singing career and pursue acting instead. I don’t know whether she actually appeared on TV or in movies, but she eventually returned to her musical roots and released her first mini-album as a soloist in 2010. Later that year, she married basketball player Lim Hyo Sung and gave birth to her first child, a son. Most recently, Shoo expanded her career into the world of publishing, translating a Japanese bestseller called “Behind the Vegetable,” which was released last month. (Shoo was raised in Japan, which explains why she can easily translate from Japanese to Korean!)

Widely considered to be SES’s best vocalist, it is not surprising that Bada alone has kept up her singing career. After leaving SES, Bada signed with JIIN Entertainment and released a successful solo album, “A Day of Renew.” She followed it up with three more albums, which did not perform as well as the first. However, she has starred in musical theater, picked up some singing awards, and contributed to several drama soundtracks along the way.

That’s all for now. Here are some (relatively) recent photos of SES reunited! The ladies still look fantastic!

Bada
Eugene
Shoo
How does this article make you feel?