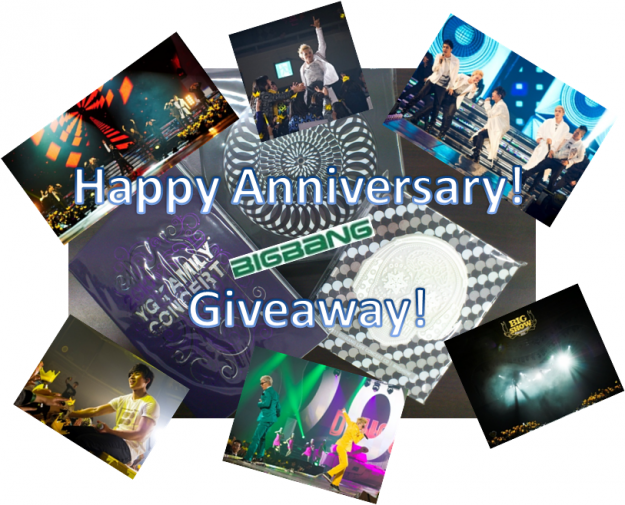 Thank you for celebrating with Soompi BIGBANG’s 5th Anniversary. Here are the winners for the comment giveaway, congratulations!

Happy 5th Anniversary BIGBANG!!! In order to congratulate BIGBANG on five great years we felt that we would give a little back to the fans so we are holding a weekend giveaway. This is a simple contest, let your friends know about this contest via any means necessary (tweet, FB, SMS etc.) and leave a comment below wishing BIGBANG a Happy 5th Anniversary! Of course we cannot check if you let your friends know but figure you would like to spread the love and help let the rest of the world know that it’s BIGBANG’s Anniversary.

So basically just leave a comment below and on the 22nd of August, Soompi will pick three winners, one winner each day (the comments are time stamped so one from each day), and announce them Monday. There are three prizes being given away, some DVDs and a CD from YG Entertainment. We will announce the three winners in order, Friday, Saturday and Sunday. The winner on Friday will get the first pick of which prize they want and the second winner (Saturday) will get to pick next and the third winner (Sunday) will recieve the DVD or CD that is left.

Here are the three prizes that are up for grabs:

We can’t mention them all but before leaving your comment you may want to take a trip down memory lane. . .

Thank you BIG BANG and Happy 5th Anniversary from the Soompi Team!

Here is a video project put together by various BIG BANG fansites, forums and our own Soompi BIG BANG forum. Thank you all for participating in this project and a big thank you to our forum/subforum moderators: leslie_lei, Nelly (Toozdae08), Nurika, Thuy (shinhdeplol) and Ginger (peppermintsugar). All your hard work is a masterpiece. . .

“Five different colors and five different individuals but we shine the brightest when we are Big Bang.”
– 08.08.31 Madame B Salon

Here is their story:

It was August 19, 2006 when YG entertainment officially launched BIGBANG, a 5-member group at its YG Family concert. G-Dragon, Taeyang, TOP, Daesung and Seungri were selected based on their talents and have endured training for two years as a group, although G-Dragon and Taeyang have been training together since 2001. Today, VIPs (Official Fanclub) are more than ecstatic to celebrate 5 wonderful years of diverse music and personalities.

BBVIPZ.com, the biggest fansite in Korea for BIGBANG, spearheaded a stop motion video project and asked the participation of International fans, more commonly known as the I-VIPs. The Soompi VIP community joined the project along with Bigbang Indonesia, Bigbang Philippines, Bigbangupdates, and BigbangVIP.

Preparations started last July 25 when these fansites/forums asked their members to write a 10-word congratulatory message for BIGBANG. The messages were hand written by the moderators on post-its and these were arranged into a specific shape assigned to by BBVIPZ. Each fansite/forum took photos of their collection of post-its in order to be made into a video. It was a tedious process since it was challenging to achieve the exact proportions asked by BBVIPZ and it took almost 5 trials to get it right.