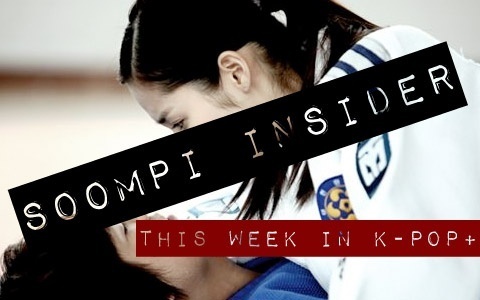 It was relatively quiet in the K-Pop world this week, though there were two revelations that stirred up a storm of discussion. Every K-Drama fangirl’s dream came true when a drama couple took their relationship into the real world, with City Hunter’s Lee Min Ho and Park Min Young going public. On the other hand, K-Pop fangirls reeled from the news that their beloved Heenim was going to enlist in the army on September 1st.

Much of this week’s popular news can be summed up in the context of relationships, both real and fake. Stars displayed their true friendship by showing up for each other – Super Junior and Jay Park greeted Boom at his military discharge ceremony, and Park Shin Hye cheered on Lee Hong Ki at F.T. Island’s concert. BoA teased her friend Siwon, calling him a womanizer, and there were false rumors spreading about Big Bang’s Daesung getting married. Super Junior leader Lee Teuk gets to pretend to be a baby daddy in the upcoming season of “Hello Baby,” along with SISTAR, and SHINEE’s Jong Hyun and Minho got fan fic writers’ pens busy when they (accidentally?) shared a kiss on stage.

Some cool things happened this week, like the announcement that SM is going to join the production of Dream High, Season 2 (JYP + SM artists together!), and a huge billboard of 2NE1 showing up in California. K-Pop as a genre moved up to the next level as the “Billboard K-Pop Hot 100” chart was launched.

Of course, with the good comes the bad, with the ever-nagging issue of plagiarism back in the spotlight. Rain’s “Busan Woman” was accused of being overly similar in both theme and sound with Raphael Saadiq’s “Detroit Girl”, and the tables are turned when a Moroccan song surfaced that sounds exactly like Super Junior’s “Bonamana.” There were also two separate million dollar lawsuits for breach of contract involving Son Dam Bi and Younha.

On a lighter note, plastic surgery and hairstyles are always on the K-Pop culture radar, with Super Junior’s Shindong being open about recently getting his eyes done, and rumors of Lee Min Ho having had work done when a picture of him posing with plastic surgeons surfaced. Fans had great reactions to Jaejoong’s new hairstyle for the show “Protect the Boss”, and SNSD’s Hyoyeon continues to get much-deserved attention for her new look.

Is it just me, or is Park Shin Hye and Lee Hong Ki in the news practically every week about their friendly relationship? Who else wants to see Jeremy finally get the girl, since Shinwoo already got his turn in Heartstrings. If you like the funny, you need to check out our resident City Hunter recapper’s hilarious new column, JBarky’s WTF Moments. Warning – you may pee your pants. Finally, congratulations to the three winners of our Big Bang 5th anniversary giveway – stayygoldenn, heenimxluv, and myphim2009, as well as the winner of our Soompi Twitter giveaway, @Chan1380711. Don’t miss out on our awesome contests and giveaways, including the one at the bottom of this article!

On the forum front, I thought I’d mix it up this week and share the top 10 non-Korean entertainment related topics.

1. What Did You Buy Today?
2. Samples? Freebies? Coupons? Savings?
3. What Did You Wear Today
4. An Eternity of Eclipse (fanfiction)
5. Soompi Fashion Portfolio
6. Cute/sweet Text Messages/voicemails
7. Nail Thread
8. Brenda Song & Trace Cyrus expecting 1st child
9. Love Bugged (fanfiction)
10. See The 30 Day Cycle Of A Woman’s Inside (not for the faint of heart!)

I have two videos to share this week. The first is this amazing cover of Super Junior’s “Mr. Simple” by the always fabulous Pumashock!

The second is Jay Park covering one of my favorite old-school Jinusean songs called “Tell Me” (말해줘), with special guests Jang Hyuk, Sol Bi, and Kim Soo Ro. It was for the reality show Immortal Song 2, which he, like everyone else, is dropping out of.

This week’s giveaway is the special edition of Kara’s upcoming 3rd album, “Step”, which includes a 32-page booklet. It’s easy to enter – do it now, and tell a friend!