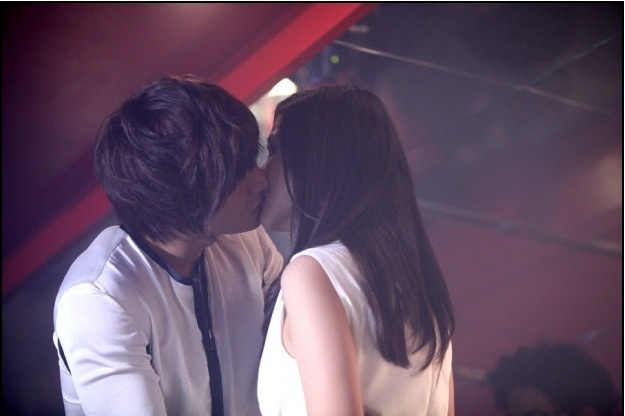 Last week’s biggest K-Pop news was undoubtedly Lee Min Ho and Park Min Young, the co-stars of SBS drama “City Hunter,” going public with their relationship. The couple made it official on August 23rd that they’ve been dating for about a month and now they are at a stage of “learning about each other.”

When you star in the same show for three to six months together, you get to spend a lot of time with your counterpart on and off the set. With long filming sessions and countless scenes together, not to mention the unbelievably good looks (in most cases), it’s only natural celebrities grow real feelings for each other following the show.

So in light of Lee Min Ho and Park Min Young’s surprising revelation, we decided to put together other star couples that fell in love on set. Please let us know who you like the best! Also, what other K-drama couples would you like to see in real-life relationships? Let us know!

Cha In Pyo and Shin Ae Ra are one of the first celebrity couples to marry after co-starring in a TV drama. They fell in love on the set of 1994 MBC drama “Love in Your Heart,” and got married the following year, although Cha In Pyo had to serve the mandatory military service shortly after the wedding.

Former S.E.S. member Eugene and actor Ki Tae Young co-starred in the 2009 MBC drama “Creating Destiny” before tying the knot last July. They dated for about a year and a half after the drama, but it was only just recently that the fans learned about their wedding when Eugene posted on her fan café, “I’ll be a July bride.” Ki Tae Young also wrote on his fan site, “I’ll be starting a family with the woman of my dreams,” leaving many fans in envy for their sweet romance.

Han Ga In and Yun Jung Hoon got married in 2005 after appearing in 2003 KBS drama “Yellow Handkerchief” together. Even with their busy acting careers, the couple is known for having a very stable relationship. Yun Jung Hoon, in particular, had to endure the resentment of countless male fans for “taking away” Han Ga In, one of the most popular (and beautiful) actresses at the time.

Ji Sung, currently starring in SBS drama “Protect the Boss,” met his girl friend Lee Bo Young on the set of 2004 SBS drama “Save the Last Dance for Me.” The couple has been dating for over four years now, often expressing their love for each other during public events.

Lee Sang Yoon admitted to being in a relationship with actress Nam Sang Mi in June. He said the two started to get feelings for each other after co-starring in SBS drama “Life is Beautiful.” They started dating from the later half of the show, which ended last November.

Lee Chun Hee met his nine-year-younger wife Jun Hae Jin by co-starring in SBS drama “Smile.” They revealed they had a baby before getting married, and got their first daughter just four months after tying the knot last March.