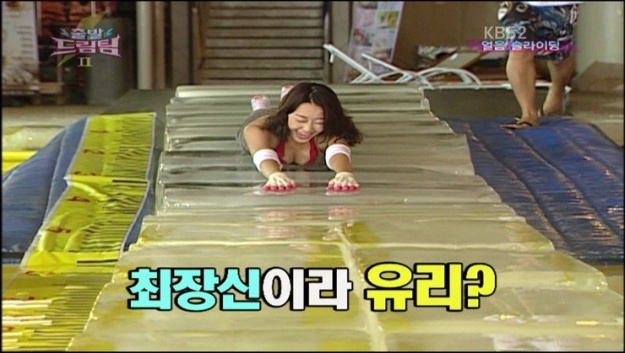 KBS 2TV’s “Let’s Go Dream Team Season 2” was picked as the August’s “Bad Broadcast.” On August 30th, the “Korean Womenlink” chose “Let’s Go Dream Team 2” as this month’s bad broadcast because it had filmed the show while focusing on certain body parts of female celebrities.

As we had reported earlier this month, on August 7th, the show “Let’s Go Dream Team Season 2” was the foci of controversy because of their summer “Dream Girls” special. Viewers of the show complained about the bikini-like clothes that the female celebrities were wearing and also the angle of the camera that seemed to focus on certain body parts.

The rules of the game: whoever goes the farthest sliding wins. The part of the game that viewers had issue with, was the fact that when the female participants were sliding, the area of their breasts were exposed.

The Fair Media Womenlink argued that the cameramen of the show deliberately focused on the breasts of the Korean celebrities. They also had issue with the close-ups on cleavage and also the fact that many of the celebrities that appeared on the show were underage.

Let's Go Dream Team Season 2
How does this article make you feel?