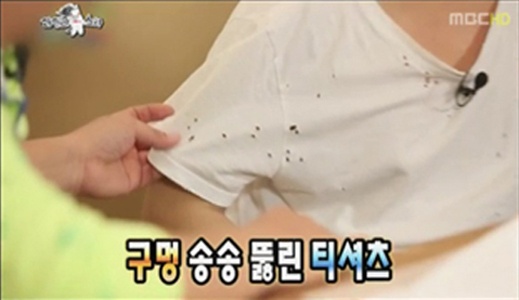 On August 31, Jung Jae Hyung guest-appeared on MBC “Golden Fishery – Radio Star” and tried to defend the 450,000 won ($425 USD) branded T-shirt he wore during his recent appearance on Infinity Challenge. The T-shirt had caught many viewers’ attention because of the tiny random holes punctured across the tee.

Emcee Kim Hee Chul asked, “Jung Jae Hyung, you are known as a ‘doen-jang nam‘ (‘bean paste guy’, referring to a very materialistic man). Would you call that 450,000 won T-shirt full of holes a branded T-shirt?” In reply, Jung Jae Hyung said, “It was a present, really! Yeah, if I liked a T-shirt, I would usually invest in one myself, but not to the extent of spending 450,000 won for it.”

Jung Jae Hyung also revealed his socks-and-sandal fashion, saying, “In this hot summer, this is the most practical,” to which Kim Gu Ra exclaimed, “You remind me of a drill instructor, just by looking at your feet!”

Yesterday’s episode was a special one, marking the program’s 200th show, which included appearances by Lee Juck and John Park.

Jung Jae Hyung
Kim Gura
How does this article make you feel?