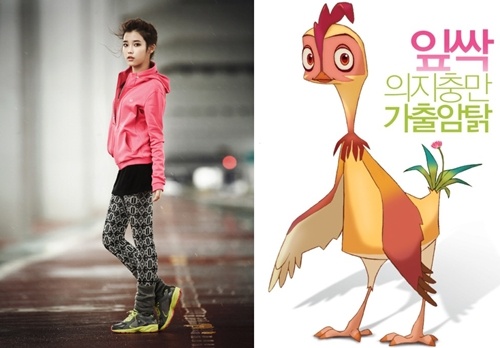 An image of IU within an advertisement is gaining attention because it looks exactly like the main character Leafie from the animation film, “Leafie, a Hen Into the Wild.”

The image of IU is from a sports brand commercial. The two look similar because of IU’s position in the picture, direction of her eyes, and her hairstyle.

Currently IU is preparing for her new album. The veteran singer and songwriter, Lee Juk is working on songs for IU’s album.

“Leafie, a Hen Into the Wild” is an animation film about a hen named “Leafie” that escapes from a chicken farm and goes on an adventure with the duck “Greenie.” In the past, the duck “Greenie” (Voiced by Choi Min Shik) was also compared to Dokko Jin, (Cha Seung Won’s character on “Greatest Love.”)

IU
Leafie, A Hen Into the Wild
How does this article make you feel?