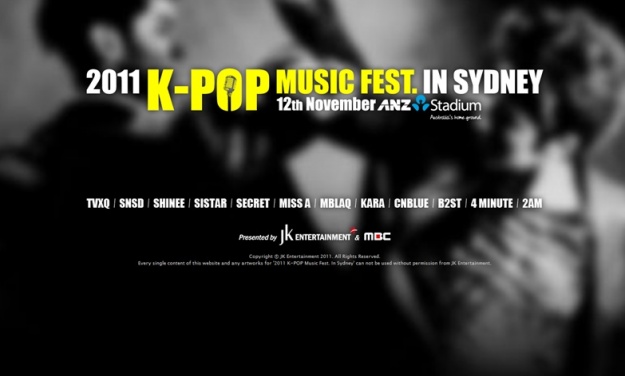 Calling all Australian Soompiers, K-Pop is coming to Australia! Some of the biggest names in the industry will be traveling down under to perform at the first K-Pop concert on November 12 in Sydney. JK Entertainment is organizing the event in Australia and has partnered with MBC in Korea and its official sponsor, Hyundai Motors Australia, to bring you the best of K-Pop.

This great star studded lineup will include:

Currently official ticket sales have started (September 1) but with the event being held at the ANZ Stadium (capacity 83,500 not the total amount of seats for the concert though) there should be tickets still available. We have seen large crowds gather for K-Pop events in Japan and of course in Korea but the SMTown Concert in France won’t even come close to this crowd. For more information about the concert checkout the event page below and support the sponsors of the event in order to let them know you like what you see.

This will definitely be a performance that you would not want to miss so join the crowd and show your love for K-Pop if you have the chance.