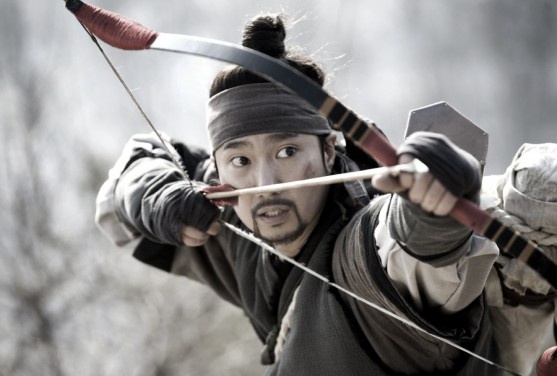 The movie “Bow, The Ultimate Weapon,” directed by Kim Ha Min, clutches second place on the blockbuster list of 2011. As striking and accurate as its arrows, the box office hit targeted an audience of 4,800,000 nationwide as estimated by the box office industry. During its opening, “Bow, The Ultimate Weapon” was an instant success for its taut storyline, impressive visuals, and breathtaking action sequences. This combination eventual led to its taking charge of the number one spot and accumulating over 1.4 million tickets during its first week.

Starring Park Hae Il, who is the main character and undoubtedly the best archer of all time, and Kim Moo Yul, whose looks are as sharp as his sword, “Bow, The Ultimate Weapon” overtook “Detective K”, which stars Kim Myung Min and recorded an impressive 4,790,000 viewers, and settled right behind “Sunny”, the year’s number one blockbuster. With a steady box office record and ticket sales still going steady despite its release a few weeks ago, “Bow, the Ultimate Weapon” aims to be remain at the top during the upcoming Thanksgiving weekend.

Although the peak season of summer blockbusters have faded away, “Bow, The Ultimate Weapon” averages 50,000 viewers per week and is estimated to go over the 5,000,000 mark, which is slightly lower than the amount of arrows that fly throughout the film.

Kim Myung Min
Park Hae Il
How does this article make you feel?