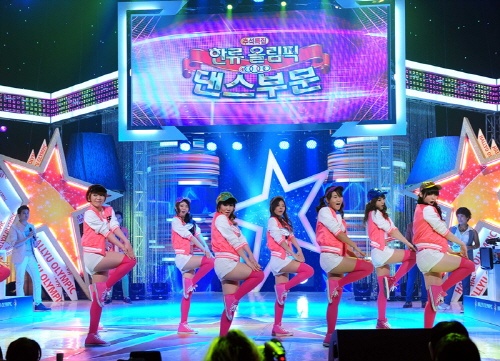 During its upcoming Chuseok Special, SBS will be holding a “Hallyu Olympics,” participated by 22 teams from Korea, USA, Canada, Taiwan, Japan and South Africa. They will compete in four competition categories — dance, resemblance to Hallyu stars, singing, and individual skills. During the preliminary auditions, there were participants from countries as far as Israel, Jamaica and Germany, proving how far Hallyu has spread all over the world.

The judging panel, comprising of celebrity entertainers and Hallyu stars, were amazed at how passionate people are towards Hallyu. Said one of the judges, “It is really amazing to see how foreigners can reproduce the performances of Korean celebrities so flawlessly.” Regarding the quality of performances by the final participants, the judges unanimously agree that “These teams are talented enough to make their debuts immediately and compete with current idols.”

Teams which are attracting attention are Taiwan’s “Super Junior”, Japan’s “Girls’ Generation” and Canada’s “MBLAQ,” with their perfect cover dances no different from the actual idol groups. Chairman of the judging panel, Tae Jin Ah, even told the Taiwan “Super Junior” team, “Sign with me immediately!”

Another contestant who showed much potential is Jeon Min Joo, nicknamed “Little BoA” for her perfect showcase of BoA’s singing and dance moves. One of the judges, Super Junior’s Shindong, praised, “She seems to have a firm foundation for her dancing. She also looks very beautiful from the way she dances.” Fellow SuJu member Kyuhyun added, “It is extremely difficult to dance so intensely and sing live at the same time, I am really impressed.” Besides BoA’s dances, Jeon Min Joo also performed a wide range of other idols’ dance moves on the spot, making the judges so impressed they called her a “dancing machine.”

US representative Chris, who wants to challenge CN Blue, also captured the hearts of the judges with his sweet vocals.

Regarding a young contestant dubbed “Little Suzy”, miss A’s Suzy said, “I was really ugly when I was young, but Little Suzy is very pretty.” The two also performed “Good-bye Baby” on the stage together. One of the judges said, “Even their expressions were identical. It was fascinating seeing their performance, as if there were two Suzys dancing at the same time.”

BoA
Hallyu
How does this article make you feel?