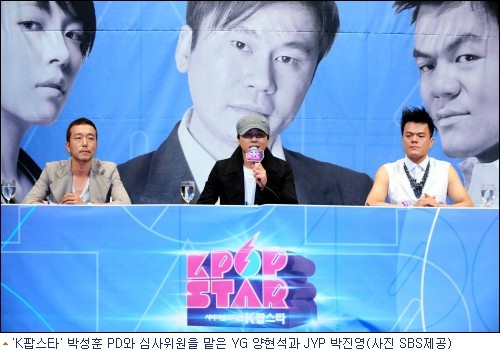 On September 2, the show’s press conference took place where Yang Hyun Suk told the reporters, “This show ‘K-Pop Star’ will be the latest audition program on network TV.”

He continued, “Many viewers have high expectations for this program since three of the top management agencies have come together for this show. This idea was actually suggested by producer Park Sung Hoon three years ago. If this program was broadcasted back then when the idea first came out, it wouldn’t have been called a late-comer, but nonetheless, it shows how hard we planned out this show.”

Some reporters asked Yang Hyun Suk what he would do if he was asked to return for season two of “K-Pop Star.” He answered, “If they decide to produce the second season, that would mean the first season was successful. I really hope for the second season and I would love to comeback for it.”

The head of JYP Entertainment, Park Jin Young, later added, “I didn’t receive any offers from SBS to help run this program. I was actually having drinks with Yang Hyun Suk when this idea originally came up three years ago.”

Meanwhile, “K-Pop Star” won’t only hold auditions in Korea, but also in the U.S., Europe, South America,
and other countries in Asia. The first episode is set to air in December.

Park Jin Young
Yang Hyun Suk
How does this article make you feel?