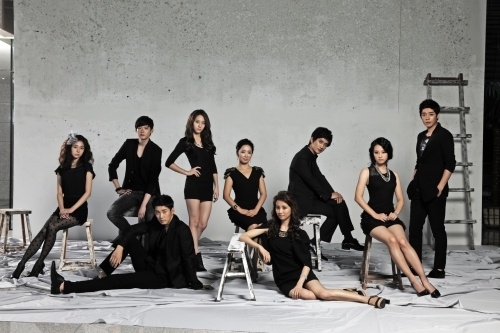 High Kick 3, the third season of the hit family sitcom series, has revealed their official posters.

The three different posters gives different feelings from each. The first poster, which shows the cast members lying, flying, or floating (in whichever way you look at it) gives a cheery, whimsical type of feel. The second poster shows the cast dressed in all black business attire. It radiates more of a serious, dark kind of look for the members. The third poster is the High Kick series’ “signature pose” with a picture of the cast members from above.

The different poster styles seem to be High Kick’s signature, as for the previous two seasons the staff has released three promotional posters each, with one fun, airy poster, one serious-like poster, and one poster of the cast members photographed from a higher angle.

The well known series will begin airing on September 19. The cast, which consists of many well known actors, actresses, and idols such as Ahn Nae Sang, Yoon Yoo Sun, Yoon Kye Sang, Lee Jong Seok, and f(x)’s Krystal, has already begun filming in various locations such as New Zealand.