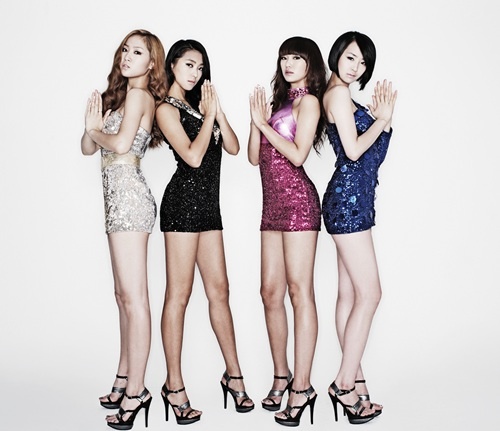 Artist of the Month – SISTAR

BIOGRAPHY
For the month of September, our featured Soompi Artist is the four-member girl group SISTAR. They first made their debut through the April 2010 issue of CECI magazine shoot for a popular street-wear brand. They hit the K-Pop scene a few months later in June with their upbeat track “Push Push”. Their entertainment company, Starship Entertainment had released a statement saying that the group would show off not only their attractive bodies, vocal and dance talents, but their style through their eccentric music, choreography, and fashion.

They added that the girls were expected to set a new culture code for the 10 to 20 year-olds in Korea. One of the members, Soyou, actually trained with the members of 4minute, but at the last minute was not able to debut with the rest of the girls. After experiencing such bumps in the road, she burst into tears following SISTAR’s first debut performance on KBS Music Bank.

The girls were one of the hottest anticipated new groups on the scene last year. After the release of their title single, they shot to number one on online music charts, music video charts, and search engines. They were even chosen to model for Samsung Electronics MP3 for their unique style and rising popularity.This year has been a busy year for these girls. Early on this year, they made sub-unit called Sistar19 with popular hit “Ma Boy”. Hyorin also joined KBS Immortal Song 2 and she showed her flawless vocals.

Winning over fans with their strong vocals and strong singles, SISTAR has recently released their first full-length album So Cool. The title song is an exciting club dance track by Brave Brothers who produced their previous hits Push Push, “Shady Girl”, and “How Dare You”. The album also features a special version of sub-unit Sistar19’s “Ma Boy”, and the new Rovin composed songs “Girls Do It”, “Follow Me”, and “New World.” Last week, “So Cool” became SISTAR’s first ever No. 1 song on our weekly Soompi Music Chart. Still going strong, they held on to the top spot this week, winning by a larger margin.

Artist Of The Month
SISTAR
How does this article make you feel?