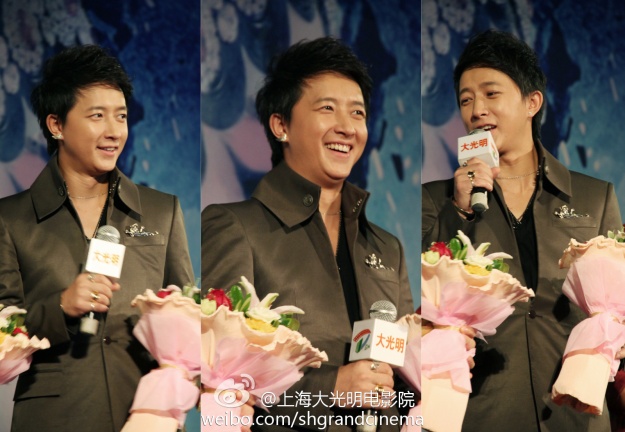 Hankyung at the Premiere for "My Kingdom"

Recently, former Super Junior member Hankyung has been busy promoting his upcoming movie “My Kingdom.” He assisted in a series of activities and premieres for his movie. The activities included public appearances in Beijing and Shanghai and also will include Guangzhou on September 7, Chengdu Premiere in September 8, and an Opening Ceremony of the Chinese Herbal Medicine in Anhui, Bozhou on September 9.

He revealed that the character he is portraying is just like how he is in real life: “There are a lot of psychological scenes for my character. In private, I am a very quiet person, I don’t like to talk much. I will hide everything within myself and not talk about it but I will know what to do.” At the same time, he revealed that he had a lot of scenes with his seniors in the movie Barbie Hsu (Da S) with who he shared a kiss and Wu Chun and he is really grateful that the they taught him a lot.

The movie is set in the 20th century and is about the story of two brothers’ search for fame, love and revenge in the height of Shanghai opera. They will face revenge for the death of their master, but also they will face resentment between each other. The release date for the movie is scheduled by September 9.

Here’s the preview teaser for the movie:

Barbie Hsu
My Kingdom
Wu Chun
How does this article make you feel?