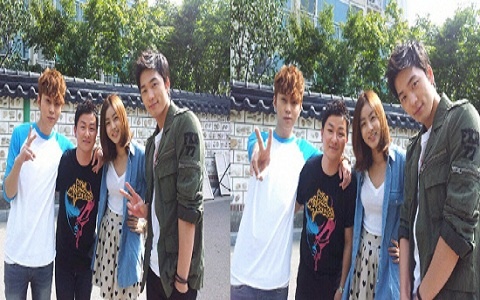 Awaiting his mini album release on the September 16, Huh Gak revealed who the leading roles will be in his music video.

Huh Gak said, “Awesome people have featured in the music video for this album. Thank you. Kang So Ra, who was the heroine in the movie “Sunny,” BEAST’s Yong Jun Hyung, and awesome, good looking actor Lee Hyun Jin…I’m very proud…” and revealed pictures on set during the filming of the music video.

A representative of the company said, “Despite their busy schedules, Kang So Ra, Yong Jun Hyung, and Lee Hyun Jin were able to feature in the music video in which we are very grateful” and “While listening to the song during the filming, those who were acting said the song was realy good and that they wished for it to become a big hit.”

The music video teaser is scheduled to release on September 8. Also the full length music video, which is a fifteen-minute long video filmed in a dramatic style, will be released along with the album on the September 16.

BEAST
Kang So Ra
Lee Hyun Jin
Yong Junhyung
How does this article make you feel?