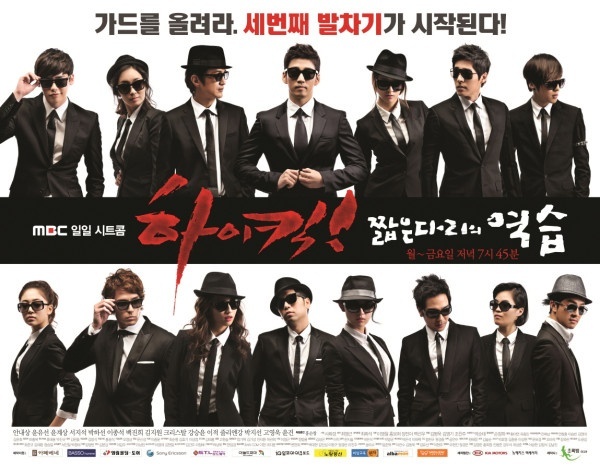 More information from “Unstoppable High Kick” and “High Kick Through the Roof”‘s sequel, “The Short Legs Strike Back” has been revealed.

The third “High Kick” will take elements of the past two “High Kick” seasons and combine them with some new ones. The title itself is something new: Short Legs Strike Back? The characters are older as well; it is no longer a petty arguments between a grandfather and his grandson. The story will lean away from the past “family” idea. The age range focuses mostly on the younger characters, as mentioned before.

There are four elements of “High Kick” that will attract audiences. Note that some of them are similar to the previous seasons.

1. Symbolic Images: In “Unstoppable High Kick”, the hole in Min Yong’s room established connection between the main characters’ movements. The same went for “High Kick Through the Roof”. The ridiculous hole in Joon Hyuk’s room gave a comedic effect whenever characters entered and exited his room. (They had to crawl through the hole in order to get in and out). The idea of the hole is still present in “The Short Legs Strike Back”, however this time, there will be a tunnel connecting two neighboring houses together.

PD Kim Byung Wook said, “There isn’t a really deep underlying reason as to why we have a hole. The hole merely serves as a fun element that will make the audience laugh. It goes well with sitcoms.” He added, “At first, it may seem odd, but later on it becomes something important- a symbol of love and affection or comfort.”

2. Just like the previous two seasons of High Kick, “The Short Legs Strike Back” will have the actors and actresses use their real names. Ahn Nae Sang, Yoon Yoo Sun, Park Ha Sun, and Yoon Kye Sang will go by their names. Some actors may change their last names (surnames) in order to be in the same family. For example, Seo Ji Suk will just change his name to Yoon Ji Suk. Keeping the names the same gives actors and actresses gives them the incentive not just to “act”, but to show their real personality on screen as well.

“When we use their real names, I noticed that the actors work harder. Maybe it’s because the name means something to them- it’s a part of them,” he laughed. “Using their real names has the effect of bringing out this real side of everyone.”

3. To ensure that the new “High Kick” won’t be too similar to the past two seasons, the age range of the characters was changed. In contrast to previous two seasons, “High Kick 3” will focus more on the young adult characters.

4. Dynamic comedy: In the past seasons of “High Kick”, there were several episodes that had a gloomy, downcast mood. When a character passed away towards the end, the audience was in shock. By contrast, this season’s “High Kick” will be lighthearted.

Kim Byung Wook mentioned that High Kick 3 will be “dynamically funny from the beginning”.

If you’ve watched the previous seasons of “High Kick”, you know you’ll be anticipating this one. The first episode will air on September 19.