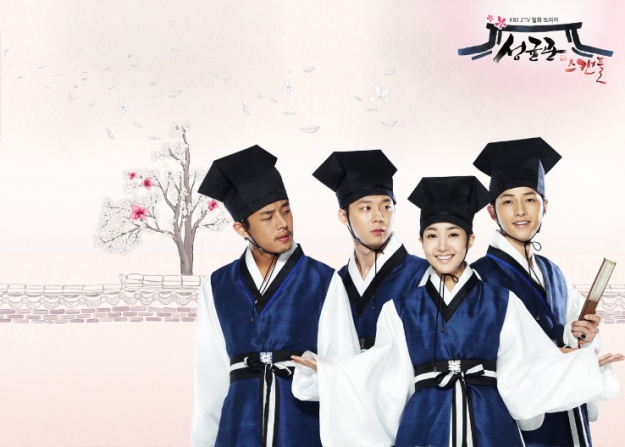 The two-hour movie is a re-creation of the 20 episodes of the drama and will also feature recent interviews with the four main leads: Park Yoo Chun (as Lee Seon Joon), Park Min Young (as Kim Yoon Hee), Yoo Ah In (as Moon Jae Shin) and Song Joong Ki (as Gu Yong Ha), also known in the drama as the “Jalgeum Quartet” (“quartet made up of outstanding talents”). There will also be NG cuts of Park Yoo Chun that have never been revealed before.

Yoo Ah In said, “Recently I’ve been re-watching Sungkyunkwan Scandal on QTV and it brings back many old memories. I’m looking forward to watching the movie version on QTV during Chuseok.”

Jo Sung Kyung, production head of QTV said, “As a drama so popular that fans proudly called themselves a ‘SungS Fan,’ I feel that it is very meaningful to do this to commemorate its first anniversary. Despite the busy schedules of the main leads, they agreed readily to do the interviews for the ‘1st Anniversary of Sungkyunkwan Scandal,’ and I’m very thankful to them.”

He added, “Together with the movie version, there will also be additional footage of behind-the-scenes that have never been revealed before, which I’m sure the fans will look forward to.”

QTV is a cable channel specialising in factual and reality entertainment and is a joint venture between Turner Broadcasting System, Inc and JoongAng Ilbo’s affiliate, ISPLUS.

Teaser for Sungkyunkwan Scandal: The Movie

Interview with Yoo Ah In

Interview and BTS scenes of Yoo Ah In