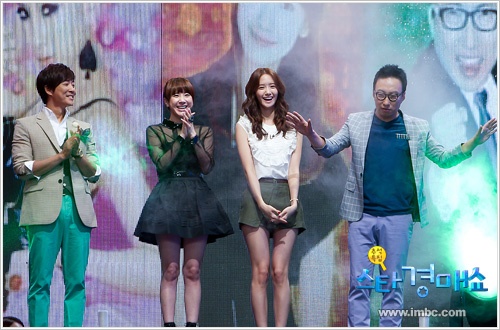 On September 13 in MBC’s Chuseok special, “Star Auction Show,” YoonA and Park Myung Soo put up their treasured items for auction in a competition to see who gets the highest bid. Actor Choi Soo Jong and singer Seo In Young joined YoonA and Park to face 200 potential bidders and compete for the highest number of interest votes.

YoonA put up for auction a costume worn over 10 times during SNSD’s “Genie” promotions. Beating out Seo In Young who got 70 votes for her New York vintage coat and shoes, and Choi Soo Jong who got 68 points for his athlete-signed sports goods, YoonA received 85 votes of interest from the potential bidders.

Whatever the amount, all the stars were happy to be able to participate in this meaningful program since all proceeds from the auction will to go to charity. And congratulations to the lucky bidders who were able to claim the stars’ treasures!