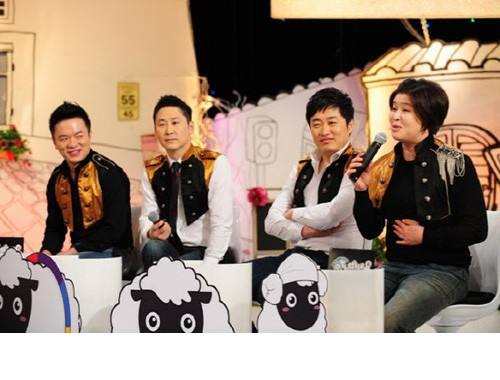 KBS‘s show “Hello” has kicked off MBC‘s “Come to Play” from the throne as Monday night’s number one variety show.

On September 12, it was reported that “Hello” had a viewer rate of 9.1% (according to AGB Nielsen Media Research), while “Come to Play” followed behind at 7.6%. Before Septeber 12, Yoo Jae Suk and Kim Won Hee‘s “Come to Play” was Monday night’s number one variety show. There was one instance when SBS’s “Night After Night” stole the crown. However, this is the first time since that night that “Come to Play” has dropped down again.

“Come to Play”‘s Chuseok episode featured Noh Sa Yeon, Lee Moo Song and Hyun Mi, who talked about their families. They discussed personal and secret matters as well. However, its ratings did not compare well to “Hello”‘s episode. (Really now. Who can beat underwear size?)

Tagging along was “Healing Camp,” which came in with a 6.3% viewer rate.