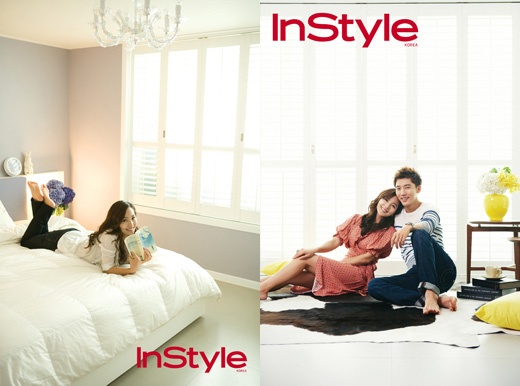 The two remodeled the house Eugene has lived in for a long time with the help of designer Kwon Soon Bok. Lately, Eugene has been really into decorating her house and her style is very well conveyed through the design.

The overall aura of the house is very calm. The living room has beige wallpapers, blue sofa, and emphasis on the orange cushion. The bedroom has secrecy with white furniture matched with light violet tone of the gallery door. Blue wallpapered casual looking study room, yellow, green, chocolate browned colored bathroom are the masterpiece created by Eugene and Ki Tae Yeong.

Unlike the usual other couples who think about marriage later, Eugene and Ki Tae Yeong promised marriage from the beginning. “I still can’t believe I am married,” the two has confessed. “It’s unbelievable I am currently married. I still feel as though we’re just dating. Having my beloved securely next to me and taking full responsibility of this marriage, I not only became more stable with acting but everything else,” Ki Tae Yeong said, displaying his happiness and satisfaction towards his marriage.

The full interview and more photos of the couple’s new home will be revealed through the October issue of InSyle Magazine.

Eugene
How does this article make you feel?